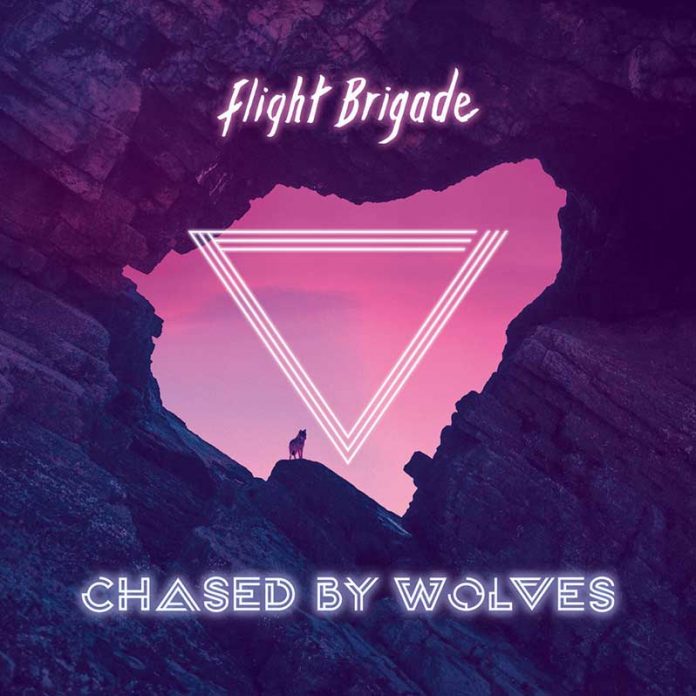 “Chased By Wolves” is brilliant.

There, that might be an odd thing to say at the beginning of the review rather than at the end, but it actually seemed sensible to bring some modicum of order to proceedings at this stage. Because there is so much about the 14 songs here that is unclear, open to interpretation, whatever, that it needs underlining just how good this is.

“Indie Rock”, the phrase with which they are most easily lumped in to, doesn’t tell the story. Their festival appearances at Glastonbury, Bestival, The Great Escape, Beautiful Days, Blissfields, and Boomtown as well as Reeperbahn in Germany, give a clue. Then there’s the radio play. Bob Harris as well as Radio 6, Radio X and Radio 2.

Flight Brigade, are essentially whatever you personally want them to be.

Maybe, just maybe, this might be down to the fact that whatever “…..Wolves” is or isn’t it has a universal quality. As Ollie Baines, the singer here puts it:“ [the record] draws on personal experiences, life stories from those close to us and we couldn’t help but be affected by what has been going on in the world politically and culturally. It’s a positive record that looks to see what’s possible, finding strength, joy and resilience from human kindness and in that way attempting to overcome that sometimes powerless feeling.”

But there’s also the darkness. Since the record was made, Ollie’s brother Seth died.  “Seth was diagnosed with brain cancer and tragically passed away in November 2018. The album is dedicated to his memory.

Family is important here, given that absolutely integral to what makes the record so good is the brilliant use of harmonies. They come from Miriam, Seth’s wife and add a dynamic that is sensational.

It is clear, literally from the off, that Flight Brigade have an agenda that belongs to them alone. Reviews cite bands as wide apart as Muse, The Killers, Arcade Fire, while when I played the album to a mate of mine the other day he said: “July Talk” without a moments hesitation.

The fact is, rather like the festivals and radio play, it all defies, rather, normal rules. “Monsoon” might be just 22 seconds, but It is proof that this has epic intent, while “Heartbreaker” hides its sadness in a wash of beguiling harmonies.

The title track is as perfect as pop music gets. Catchy, lush, yet 100% ready for the charts and 100% original, while the words “fragile” and “poetic” were both on my notes for “Tinderbox”. The Muse comparisons are fair enough here, but there is something lugubrious about them too and there is a dance overtone to the synth work.

Then, it happens. You see, just when you think you’ve got them pegged, a full-on rock song breaks out. “Fury Road” even boasts a solo, and cleverer people than me would probably call it post punk, or something. Me? I’ll just go “its ace, mate” like a simpleton.

The pulse for the metaphor laden “Siren”, which takes its time to brood and build, sucks you in, while I’ll swear I went to school discos in the 1980s when “Stranger Things” played. Whatever, it is just another on this classy journey.

They are able to inject a real urgency into these things when they choose, too. “Where Eagles Dare” has a more strident groove, but you want to talk memorable? This one will be euphoric when it hits. Thomas Pink combines magnificently with Ollie on guitar on the genuinely rock n roll “Brainwave” which is shot through with some superb keys, this is the work of a band with limitless potential.

Many of these are personal. None more so than the brilliantly epic “Alligators”, written about the frontman’s grandfather going off to the Second World War. It is a fitting tribute.

“How Your River Runs Through Me” is strangely understated, but gorgeous with it, while the vast soundscapes created throughout are never more grandiose than on “Creature” , which provides a fitting, widescreen backdrop for the poetic verse.

So, at the risk of repeating myself “Chased By Wolves” is brilliant. I disagree slightly with the “indie rock” epithet, but it does give me this easy hook: I always thought that DMA’s were the best modern indie band. If Flight Brigade are indie than they’ve got the crown. Whatever they are, whatever this is, it deserves to soar.