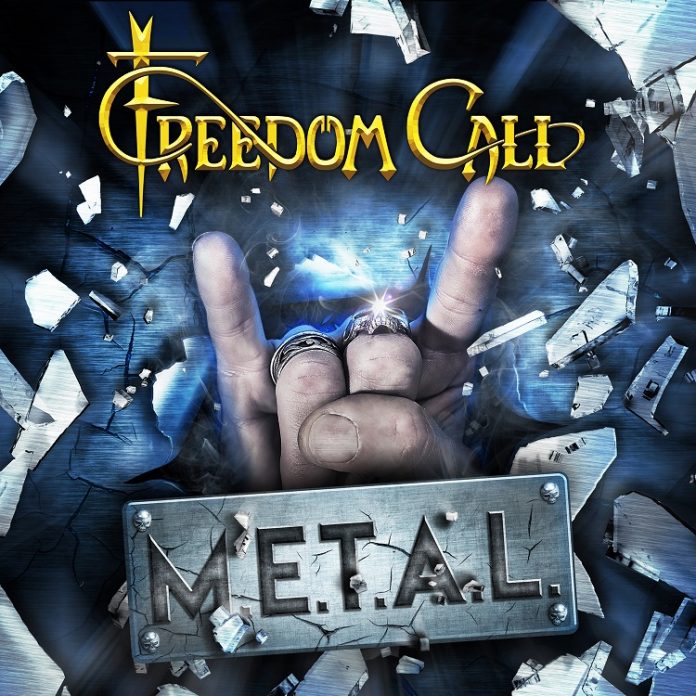 “Standing tall for heavy metal, for all eternity, as warriors forever more, united, we are Freedom Call….”

That’s the chorus for the title track on Freedom Call’s tenth album and it is kind of tempting to leave it there.

39 word reviews are sort of frowned upon, though, so I’d better pad it out a bit.

Calling a record “M.E.T.A.L” though, is just about perfect for Freedom Call. Because for 21 years, that’s what Chris Bay and whatever revolving door of a line up he’s worked with (and the one on this record isn’t the one that’s touring) have brought.

If you have never heard Freedom Call before, then the best way of putting it is this: if you had to define to people who only had a passing interest in it, what the essence of the sound was, you’d play them a Freedom Call song.

“111” the one that kicks this record off, pummels its drums at a million miles an hour, cheerfully lays down the riffs, and when its chorus soars, it proper soars.

“Spirit Of Daedalus” written by Lars Rettkowitz, who’s lead guitar work here is phenomenal throughout, essentially repeats the trick – and although in many ways you could say that about many of these, there are enough subtle differences here to keep things fresh.

Like the keyboards on the title track (and if its meant to sound like “United” by Judas Priest, then it certainly does), and like the radio friendly stuff on the catchy “Ace Of The Unicorn” it is one of a number of tunes here that sounds proudly 1980s – in fairness the whole record is a return to their earlier sound – it is equal parts batshit crazy and pure brilliance

There is a story on the back cover about how playing the ace of the unicorn relates to escapism, and if you ever needed to understand this sort of music, its right here. This is why people listen to it. This is why they make it too.

“Sail Away” has a touch of mid-period Maiden about it. Closer to nailing it than most bands too, and “Fly With Us” is equal parts Dragonforce and Eddiethehead. And as much as I’ve admitted on this site before that I haven’t got a lot of time for Manowar and the likes, this type of power metal works just fine. Why? Well, because “One Step Into Wonderland”, typically, mixes the metal with a huge dollop of AOR.

One of the best things about Freedom call is their simplicity. They don’t arse about with anything approaching the suffix “core”. They keep it pure. Like on the galloping “Days Of Glory” and if “Wheels Of Time” is a bit more modern, then don’t fret. Nothing growls at you here.

And so it goes right to the end. “Ronin” battles anything in its path, and if you like your bands as an army, this is for you. Sabaton would probably fill Wembley with this, to be fair. These boys, though, aren’t that fussed. They are like the last song here, says the “Sole Survivor”, and they are not going anywhere.

There are bands that shuffle in, all demur, then there are Freedom Call. Loud, proud, and out there doing it. You know how there are two sorts of people, those who you don’t know are there and those who have never seen a room they can’t be the focal point of?

Guess which Freedom Call are? Actually forget that. And get ‘em up high. Chris Bay commands it. And so does the unicorn.