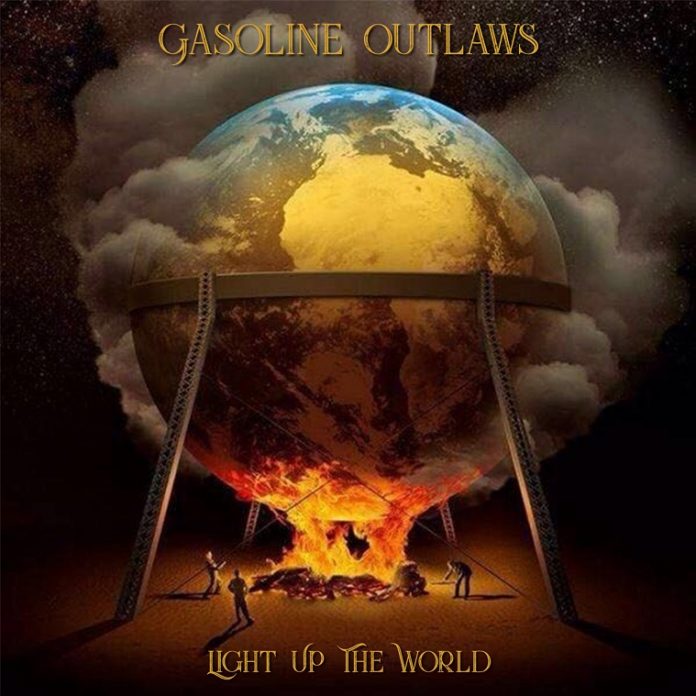 Over my many years I’ve ignored a fair number of bands based purely on the band name and that old adage to never judge a book by its cover applies to Gasoline Outlaws. If, as I did, you expected southern American rock then you’re going to be pleasantly surprised to hear that they hail from Belfast and that this, their second album, sounds nothing like that.  Introduced to me by the “New Wave Of Classic Rock” Facebook Group this album has been funded by a pledge campaign which like many others has suffered from the problems that particular organisation has inflicted on many musicians.

Opening with the track which gives the album its name, an insistent drum and bass pattern sets the tone for the song about the state of the world. In terms of pace “Livin’ this way” up next is very similar although it opens with a chugging guitar riff pulls you in. What instantly stands out across these tracks and the album is Matt’s vocals. His voice is clearly distinctive and works beautifully with the song structures and the melody behind them

“Better Days Coming” introduces the vocal interplay with Amy Montgomery (I had to google her – talented singer!) and my instant thought was the tie up between The Answer and Lynne Jackaman on Nowhere Freeway; and that’s a good thing. With its different pace and chorus “Where we started” is going to be a lighters in the air gig favourite.  “The System Is A Lie” is a curt observation on screwed up politics with tempo changes drifting off an acoustic guitar leading into a taut solo.

“Fight for one more day” picks it up again with the passion from earlier and surely the fans at gigs will be shouting ‘Fight’ in time with the chorus?  “Executed” sounds like what you might expect from the band’s name and wouldn’t look out of place on a Journey album. A largely acoustic track, it’s a grim tale and the track stands out from the rest of the album because of that style.

“Breathe Again” and the closing track “Hard Times” will I suspect become staples of their live set as they’re both crowd pleasing rockers.

This is a band blooming in a market that is tough for new(ish) bands, but in Matt they have a vocalist with a great voice and such distinctive vocals that you’ll never mistake them for anyone else and in Adam a guitarist who shows that he can play as well as the rest and his guitar work, electric and acoustic, has some fine solos and stands proudly across the whole album. This in no way denigrates Chris on bass or Ryan on drums whose contribution is every bit as valuable and proves that this is a band first and foremost.

Until I listened to this album I’d not heard their previous album or seen them live, though their reputation preceded them, with a number of recommendations from others. As a consequence I’m always concerned about coming to a band or album after the masses have discovered them and praised them to the skies.   The temptation is to either toe the line or go in completely against trend but at 41 minutes this is a good old-fashioned rock record and comes highly recommended.