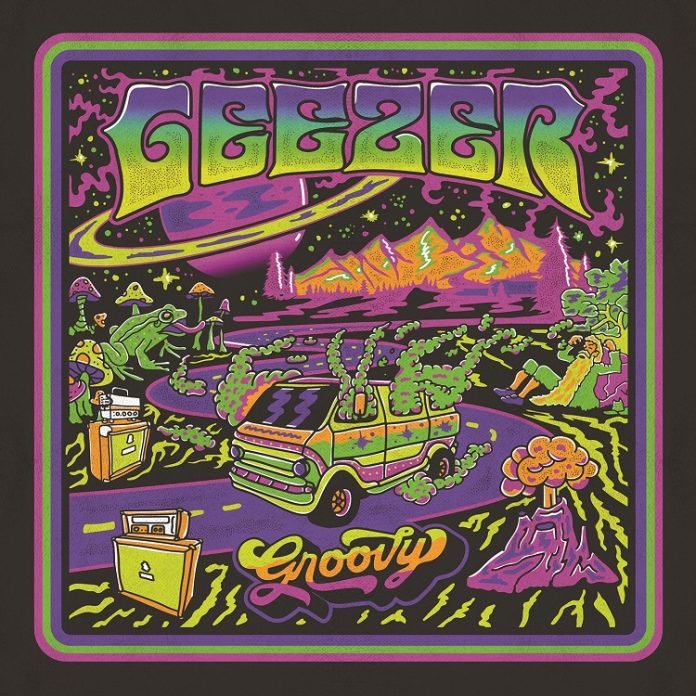 “Groovy is the new old way.” So sings Pat Harrington on the title track here. It comes at what you’d imagine at the start of on an LP would be the start of side two (and equally this is the sort of record that LP’s are made for) and it’s a real surprise.  A driving, thumping bluesy rocker with some real fun sounding piano.

“Full tilt boogie, you know what I mean, yeah?” he says the in second verse.

The answer is no, not really, but then on the flipside, absolutely yes. This is a universal language.

“Groovy” is their first album for four years, and sees new drummer Steve Markota behind the kit. He thumps this, he really does. In fact, his welcome is early doors, given that his beat is the first thing you hear on the album.

This gets cowbell bonus points too (and honestly, has there ever been a bad song with a cowbell in?), and its almost like a welcome back, given that it builds with Richie Tousell’s bass before Pat Harrington’s riff is like the finishing garnish.

And speaking of riffs. There’s a lot of them here. And some fabulous lead breaks too. The last time I reviewed them I said something like Geezer were “the perfect mix of Corrosion Of Conformity and Thin Lizzy”. There’s probably more of the former here this time, and some desert dry sounds, but this is still one of the more interesting blends of this around.

“Atlas Electra” sounds as vast as the night sky, full of stars, that this sort of music always seems to create, the vocals float almost and it creates a somewhat incongruous sound. “Dead Sea Scroll” is more eerie, a little more disorientating, but again, there is a real blues taste to these sounds if you peel the layers away – plus the bass here is gargantuan.

The way Harrington delivers the lyrics is almost spoken, “I feel like a name on a dead souls scroll” he muses, but then it explodes. Everything here is groovy – as in filled with groove – but this might be the biggest.

It’s kind of trippy too – at least what I think of as trippy – you can lose yourself in “Awake” for certain. If you do struggle to sleep, these are – in my experience – exactly the sort of thoughts you have too.

“Drowning On Empty” follows the formula, and by that I mean it locks into the type of riff that will see a lot of blokes of a certain age, with beards, nodding their heads. This is not a sexist point in any way, but I’ve been to enough of those type of gigs to know the form.

The last two, though, are a little different. If the others were, as I put it above “kind of trippy” then “Space Mountain”, five minutes of dreamy rhythms with the words: “is everybody high enough?” over the top, and the last one, “Black Owl” – all nine minutes of it – take things to another place. Not radically different, but enough to add some light and shade.

That’s Geezer all over, actually. You think you know what you are going to get – and to a large extent they provide that extremely well – but there’s enough subtlety here to mark them out as their own men.

Which is pretty groovy, when you think about it.