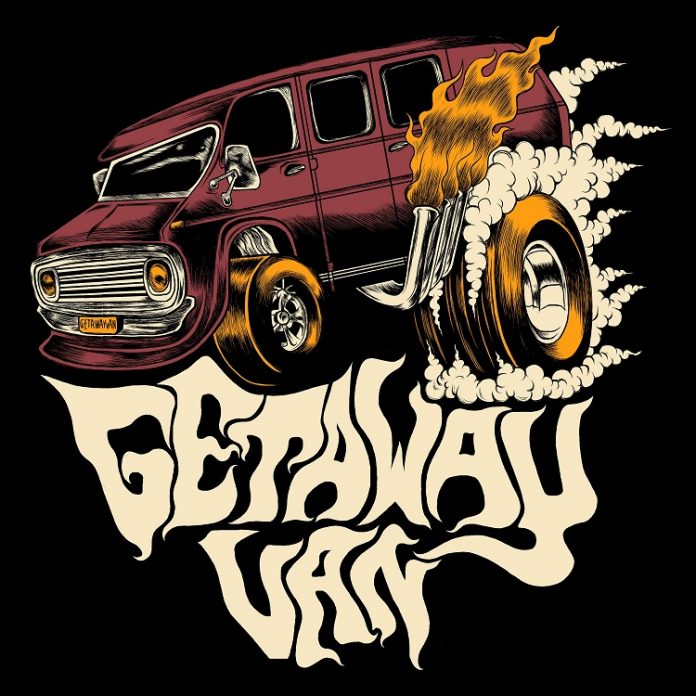 Overthinking. You either do it or you don’t. I do it. A lot.

Which is precisely why I spend my nights mulling things like: “I wonder why they called themselves Getaway Van instead of Getaway Car?” then coming up with plausible reasons for said moniker, like: “oh maybe it because they’re a dirtier, riffier thing and getaway car is too slick”.

The thing about that type of mind, though, is that you don’t sleep much – let’s be fair, if you obsess about why van and not car in the name of a rock n roll band, those are probably not the only thing you are concerned about – but also that sometimes you might be right.

And so it is that Getaway Van are hurtling out of Vancouver with a sound that is greasier than a day old bucket of KFC in Orange Goblin’s tour bus.

This is their debut full length, and whilst there are many bands out there that know how to knock out a fuzzy riff (and the brilliant “Coming Back” is pure Truckfighters) the USP for GV (as it were) is that with three songwriters and three vocalists there is nothing samey about this, even if ostensibly you’ve heard (most of) this before.

Not, perhaps, the intro. You have to love a good intro. There is something grandiose, a touch decadent maybe about such an escapade, and this has a cracker. It gives way to a pulsing “Branches” and if you hear the faintest murmur of the desert in this you aren’t the only one. But the vocals are spat out, and there is even a hint of punk about it.

“Follow Me” has great swinging balls and shows them off, Zach Fox does the bass thing supremely throughout, but never better than here. But as an example of the way they do things, there is a real interesting thing going on in the harmony vocals here that many bands of this type wouldn’t even dream up.

Now, you remember when I mentioned that I have a rather active mind and don’t relax? Weeellll, the chorus for this damn thing goes: “When’s it gonna be my turn to die of cancer? When’s someone gonna have a bad day and stab me in the throat on transit? I’m so afraid of death that I forget to live. So I pour another drink for myself and I give give give.” That’s some next level shit, right there. Put them on the cover of the newsletter, cos these boys are good.

That they manage to make this the best song on the record is an incredible feat, but that’s the facts, jack. Just the facts – to paraphrase Clutch, which I like to do from time to time, obviously.

“You Make Everything” has a bluesy side, while “Lord I’ve Been Running” has a funkiness, like when Spin Doctors were good, almost. It has a wonderful hook and its unlikely you’ll resist its charms too long, and “So Long” has had a listen to some early Orange Goblin and likes the idea just fine.

But they’ve thought – and I kinda hope these boys are kindred spirits in the thinking stakes – about bookending this, properly. And there’s an outro too, to neatly tie things up.

As befits a band called “Getaway Van” this is fun, it knows how to get in trouble, and it knows how to cover its tracks. Get it. That’s a no brainer, requiring no thought at all.