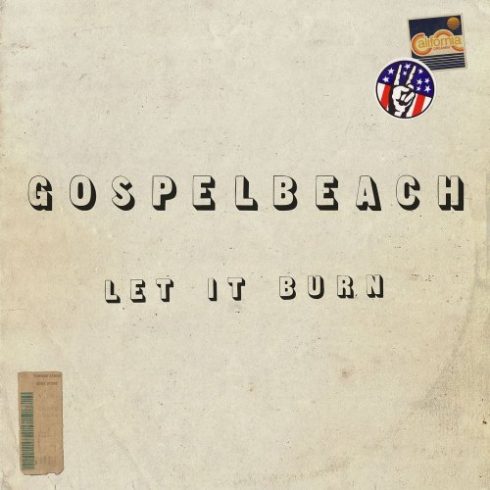 GospelbeacH is a Los Angeles folk rock band formed by singer and guitarist Brent Rademaker, formerly of Beachwood Sparks. “Let It Burn” is their third studio album and the follow up to their acclaimed 2017 album “Another Summer of Love”

The album opens with `Bad Habits` and what a solid cut this is. A song in a similar vain to The Stones `Fool To Cry` so wonderfully laid back. This melancholic ballad written about learning from your mistakes has what to me is a Californian feel about it. There are some subtle lap steel tinges, great guitar riffs and almost an orchestral feel in the last minute or so.

Alright, let me state the obvious `Dark Angel` sounds so much like a Tom Petty track but still it`s a delightful slice of West Coast rock with cracking guitar solos and some glorious organ snatches.

`I`m So High` is an uplifting upbeat offering that the title really covers, great drumming, keys, guitars, just great full stop with some lyrics such as “I feel like Winston Churchill in the summer of`45” that can`t work but so do. Listen out for the Yell and drum slam at the end.

Part of Rademaker`s writing came from dealing with the death of his father and the end of his marriage, as well as external concerns such as the California wildfires and the 2018 shooting at the Borderline Bar and Grill in Thousand Oaks, California. The quietly melodic `Baby (It`s All Your Fault) ` is a prime example. A moving offering.

Another slow burn follows with `Get It Back` an near anthemic piece which seems to be an analogy between a faded star and possibly the singer`s father.

`Fighter` is a mid-tempo composition which seems to compare the narrator`s relationship to fighter, fighting to salvage what`s left of the relationship until the end.

I`m still unsure about `Unswung`, it seemed almost out of place with the rest of the submissions, a sort of throw away track.

`Good Kid` is the story of a youthful doomed romance which has some nice harmonies, a commercial soft rock come AOR type outing. The following track `Nothing Ever Changes` has more of an edge and some pleasant keyboard organ inflections and well worked vocal synchronisations that put me in mind of Rick Springfield or John Mellancamp.

Title track `Let it Burn` was in a similar vein to the previous cut but had a little more of an edge to it. The album closes with `Hoarder` another slow burn rock and roller. Fuzzy guitars, lap steel, honky tonk type piano twinklings, guitar solos and leisurely vocals, a real coming together of the performers in this band.

“Let It Burn” is an album of West Coast rock and roll at it`s best.