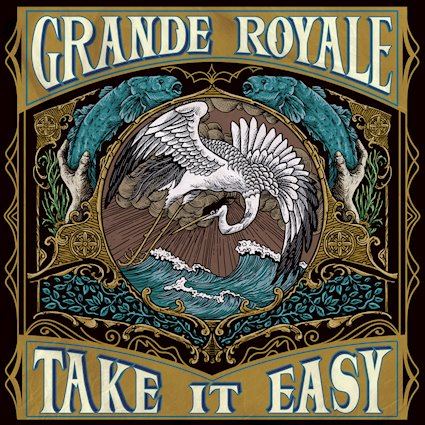 Back in the summer of 2017, I reviewed an album by Grande Royale. “Breaking News” I concluded, was “some of the best pure rock n roll” anywhere thereabouts.

Now, after a live album last year, they are back for a full length studio record – their fourth  – and although the “pure rock n roll” thing still stands true, there are some significant changes.

Not least of which is on the vocals, Gustav Wremer (also the band’s guitarist) now performs a dual role, but there is plenty of suggestions elsewhere that they fancied changing things up, just a little bit.

Not massively, you understand. If you liked them before, you will like “Take It Easy,  or if you don’t know them and like the sound The Hellacopters created on their later records, then you’ll find much to cling to, but on these 11 songs they are moving just ever so slightly in a different direction.

The opening salvo, actually, gives a few clues as to that. “Bring It Up” adds a horn section, a 70s vibe that suggests it was recorded in Muscle Shoals rather than The Honk Palace (Nicke Andersson’s gaff)

“Out Of Gas” as catchy as you damn well please, is sort of back to normal – although it does show that Wremer is perfect for the singer’s position and ever likely they weren’t arsed to look elsewhere.

That, though, is a prequel to one or two that make you do a double take. Tove Abrahamsson provides vocals on “Hands Up” which makes you think of the much missed Purson rather than anything they’ve done before. 70’s sounding, trippy, hippy and mystical, “I’ve seen the silence” she sings, and whilst you wouldn’t understand it, that line somehow captures the vibe perfectly.

“Sweet Livin’” is happy to dig into the toolbox and pull out something bluesy as hell, while if you don’t go “blimey that’s a ZZ Top lick” when “Cogitator” starts, then I am going to have no choice but to close the website, because I obviously don’t know what I am talking about anymore.

“Decelerate” gets rock bonus points for starting with a crescendo, and then gets MV bonus points for sounding like a Night Flight Orchestra outtake, and if the harmonies throughout the record are absolutely on point, then never more so than on “Ms. Sunshine”. Glorious, warm and aptly named.

I have said a few times here that this is GR making some ripples in other ponds, and what I mean, really, is stuff like “Baby You’re A Fool” which on one hand is resolutely Swedish rock n roll, but on the other is soulful and funky.

“Going Strong” is best described as Southern Rock done Northern European style, but just in case you’d forgotten, the groove on “Standing In My Way” is classic in just about every way, and “On And On” does something slightly grandiose that you didn’t see coming.

All of which adds up to a record that maybe is less immediate than “…..News” and some of the flourishes suit them better than others, but Grande Royale obviously didn’t want to be pigeonholed – and credit to them for not taking it too easy.