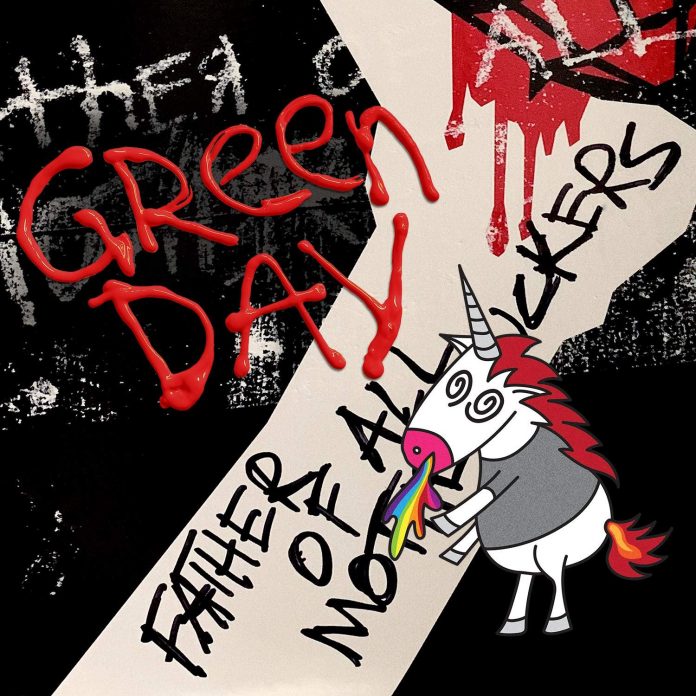 There was an interview in Kerrang! Not long ago, with Green Day’s Billie Joe Armstrong.

Me and Biille are roughly the same age – there is a possibility he may have more money, talent and stuff – but at one point, he said this: “I’ve realised I don’t like long songs.”

Y’see back in the early days of this website I got into Prog. I reviewed a lot of it. Then, somewhere down the line I came to understand that firstly I could never do the thing justice, but really, generally (and there are some exceptions – “Coma” by Guns N Roses, Dream Theater, Genesis) give me short and sharp and melody.

I don’t like films for the same reason. People think I am mad, but I get bored quick.

There’s none of that on “Father Of Al Motherfuckers”. 11 songs. 26 minutes. This is a fizzbomb of excitement for the ADHD generation of which I am part. Or put another way, within about 15 seconds of the title track he’s given it “I’ve got paranoia, baby” and made it sound it like a good thing. And everyone who rather thought that Armstrong, Cool and Dirnt were describing their lives when in 1994 they emerged with the classic “when masturbation’s lost its fun, you’re fucking lazy….” Line on “Longview” have got their anthem, again.

First thing to say is “Father Of All….” Doesn’t sound much like Green Day at all.

This has led to some reviews from clever dicks online that are less than favourable. That is sort of why I wrote this one. Because someone had to redress the balance. Some idiot with a YouTube channel, the type who thinks he’s an “influencer” no doubt and does his “vlogs” in-between playing with his computer games online with other sad lonely dicks, has given it 0/10. Like Green Day are gonna care. Like the millions who buy it are going to give a shit.

The rest of us – you know the ones who just like music – can like “Fire Ready Aim” – which sounds pretty much like The Hives, or not. That’s your choice. Me? I have to be honest and say I haven’t enjoyed a Green Day record this much in a quarter of a century.

”Oh Yeah” understands harmony, glam rock, and has some brilliant keyboards – and sounds anthemic. All inside three minutes. “Meet On The Roof” by contrast is pop. Nothing more, nothing less.

Best of the lot is the utterly glorious “I Was A Teenage Teenager”, exactly the type of stuff that classic, vintage bands (and that’s what Green Day are these days) should be doing if they want to keep things fresh.

“Stab You In The Heart” is a Chuck Berry song in all but name, while “Sugar Youth” does more in 1 minute 54 seconds than their peers have managed in decades. This one is the losers anthem, the one for the anti-heroes. And the one that’s got the middle finger up at that fool on YouTube.

“Junkies On A High” takes things down a Dinosaur Pile-up type road, which is kinda cool, and the line “rock n roll tragedy, I think the next one could be me,” underlines the fact that BJA has always written songs that were cleverer than they were perceived to be. And “Take The Money And Crawl” starts off as part Western before just doing rock n roll.

It ends with the longest one, “Graffitia” – don’t fret, its just over three minutes  -and there’s a real feel of one of Producer Butch Walker’s tunes about this, (and if you’ve never heard his classic “Summer of 89” then stop reading this, and listen to that, its way better). A don’t bore us, get to the chorus. In fact, just don’t bore us at all.

“Do you have the time, “ they once sang. “To listen to me whine.” Just think. They sang that before social media. What a world we live in now. There are no such things as facts anymore, not in this post truth age. So here is an opinion – its ok to disagree, because I couldn’t care less what you think. “Father Of All Motherfuckers” is thrilling, and fabulous.