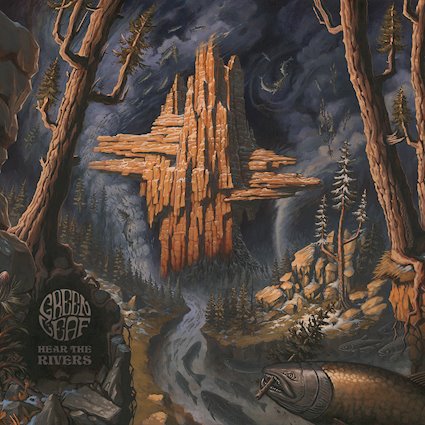 I’ve always been wary when someone talks about the “best kept secret”. All that means – usually – is that not enough people care. I don’t mean just music, either. I followed a van on my way to work the other day that described the firm as “the West Midlands’ best kept secret” and all I am thinking is “mate, you need some better PR.”

No, when it comes to music, I’ve always been of the opinion that Ozzy was right when he said something to the affect of “well if you don’t want anyone to hear it, stay in your garage.”

Which is fine until you are faced with a band like Greenleaf. Partly because of their origins, maybe, as a side-project, they have always gone rather more under the radar than they should.

Now, you could say you don’t always get what you deserve. If you did, then I would be married to Kylie Minogue and Shinedown wouldn’t be an arena band, but we live in the real world where I am not gazing at Ms Minogue right now and people enjoy Brent Smith and the lads dull sound.

Everything about Greenleaf’s seventh full length record is very good. Just as everything about their sixth – 2016’s “Rise Above The Meadow” – was likewise, but there seems to be realisation about them that says: this is our lot in life.

The opening paragraph of the press release that came with this basically admits it: “The same question arises three years after the beautiful Rise Above The Meadow: Why are Greenleaf not packing the biggest venues just like Queens Of The Stone Age?” it says. And you have to say they do have a point.

“Let It Out!” the glorious exercise in riffs that is the opener should have them packed to the rafters. Right from the moment the drums combine with the bass throb, to the fuzz-tastic riff, this, in some parallel universe, would have been the feelgood hit of the summer.

As it is, it does its work – ironically sticking up for the little man in the lyrics – brilliantly, as in fairness does the rest of the record. “Sweet Is The Sound” is bluesy in the way that Rival Sons are bluesy, but eschews any of RS’s mysticism in favour of a good ol’ freak out.

Interestingly the record is produced by their former drummer Karl Daniel Lidén, and he has found some real urgency in the groove. The choruses are bigger this time around. “A Point Of A Secret” is typical of many, but yet when Arvid Hällagård sings “been kept in the shadows so goddamn long” here, it is difficult to think it isn’t personal.

“Good Ol’ Goat” is a real cracker, stomping, a little primal maybe, but in truth, there is nothing here that isn’t a cut above. Whether its one of the more epic ones, like “The Rumble And The Weight” which has a hypnotic quality, one of the short, sharp ones like “Oh My Bones”, or one of the cuts that finds a middle way between the two, like “We Are The Prawns” – which pulses along with a real electric edge – then “Hear The Rivers” is superb.

Whatever their line ups – and they have had plenty – then Greenleaf have always been a band who lived by the riff and died by it too, for all that, though, Tommi Holappa has pulled out all the stops here and plays a blinder. “In The Caverns Below” is a real highlight, while it isn’t inconceivable that “High Fever” could engender some moshpit action – and there isn’t many bands like this who could do that.

Closing with the longest track here, “The River’s Lullaby”, is just fine too. Allowing for some meandering reflection on the record as a whole, while still belonging very much to this collection.

So, is “Hear The Rivers” the big breakthrough, then? Nah, probably not, but everyone in Greenleaf seems just fine with that. Either way, heavy, fuzzy, riff filled psychedelic tinged blues doesn’t get much better than this.