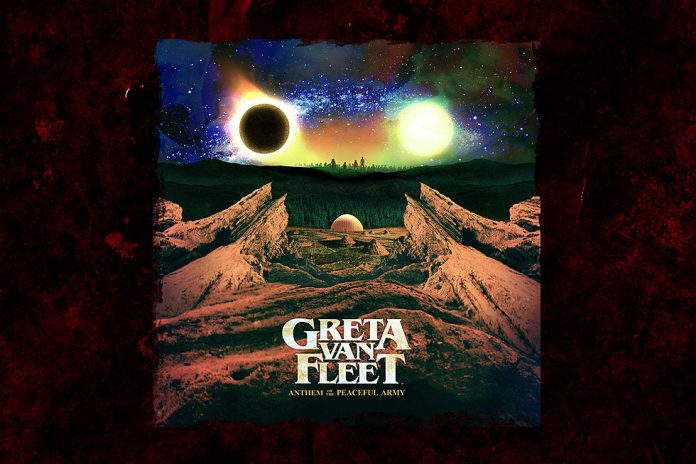 It’s hard to think of a band in the last decade or so that in rock circles comes more hyped than Greta Van Fleet, with fans being split by those who rave about them to those who dismiss them as mere copycats.

What’s clear though, from whichever stance you take, is that there’s an elephant in the room; so let’s address it up front. Josh Kiszka has a voice that will be marmite to many. Alongside Geddy Lee or Justin Hawkins it’s the distinctive signature sound of the band, it will divide fans equally, but there’s no avoiding it on the album as it soars over the music his highly talented brothers and band mates create. For those who care; Geddy is god, Justin a meh.

This their debut album after two EP’s (Black Smoke Rising & From The Fires) has the PR & Marketing push behind it that many equally worthy bands can merely dream about.  ‘Age Of Man’ opens the album with some trite sci-fi fantasy lyrics that ape Geddy circa 2112 era whilst ‘The Cold Wind’ which follows is rockier and leads into the radio friendly and much YouTubed ‘When The Curtain Falls’.

The middle section of the album drips patchouli oil and not in a good way. It’s full of 70’s flower power hippy lyrics and rhymes that any decent English teacher would have put a red line through. ‘You’re The One’ an evocative plea to an ex has an organ solo mid track that must have had half a dozen lawyers looking into its origination.  ‘The New Day’ is mainly a sweet acoustic number with a shuffle pattern and guitar riff at the back end that nearly works.  Jake Kiszka gets to show off his slide technique on ‘Mountain Of The Sun’ and to give him credit where it’s due, he is actually a decent guitar player who will only improve.

‘Brave New World’ is a nicely structured song but simply reinforces the fact that they need to have a long hard look at their lyric writing whilst the penultimate track ‘Anthem’ is very twee and has a mock choir chorus that sounds like the 1970’s Coca-Cola advert song: ‘I’d like to teach the world to sing’ by The New Seekers. That’s just odd.

As a first album it will unquestionably be a success due to the publicity push it’s had behind it,   although I would argue that ‘Rise’ and ‘Permission to Land’ or even ‘Inglorious 1’ were better debuts. The question of the day is can they follow it up with volume two or are they destined to be a one album wonder?  I’m old enough to remember a little over a decade ago The Answer releasing Rise and the hype behind that, yet as a band they’ve never appeared to achieve the success that was predicted for them. Whether GVF can sidestep the difficult second album and go onto bigger and better things is going to be a situation fans are going to watch out for with interest. If they continue to photocopy 1970s albums they’ll crash and burn.  In the meantime, enjoy them for what they are whilst they’re here.

Moored next to the elephant is a zeppelin, and I never mentioned them once!