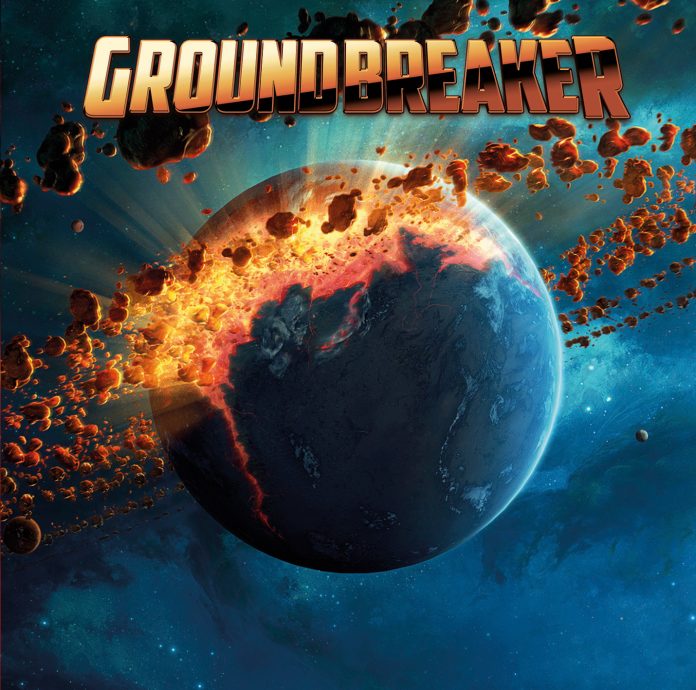 How many of you reading this have gone to a concert and watched the support band – who you vaguely remembered from years previously – and about thirty seconds into their set turned to your mate and said: “Jesus, these are good…..”

Everyone, I suspect and what’s more, when it happens, its one of the best experiences you can have at a gig. It’s happened to me plenty of times, but one was when FM opened for Thin Lizzy.

The specific reason for mentioning that here is that the lead singer in Groundbreaker is Steve Overland, he of the best voice on Planet Rock and the vocalist in FM.

The story of Groundbreaker basically, is that the boss of Frontiers Records, thought it’d be good to put together a band that contained some of the biggest names in Swedish and English melodic rock.

Everyone has a fantasy band they’d love to put together. The difference is that Serafino Perugino is better connected than a load of beardy blokes in the pub and can actually do these things, so he put Overland together with Robert Sall (Work of Art, W.E.T) and the results are – as they say – in.

Actually, its not quite that simple, because the presence of Alessandro Del Vecchio is just as important. Keyboard player with everyone – his work with Voodoo Circle particularly impressive – he is also a renowned producer and he’s helped craft something special.

The 11 songs that “Groundbreaker” contains are pretty much exactly what you’d expect, but don’t think that that is a bad thing, quite the opposite. Rather that the five-piece (completed by Nalley Pahlsson – Bass and Herman Furin on the drums) deal in the type of confident, classy, brilliantly played stuff you knew they would.

Opener “Over My Shoulder” sets the tone. It chugs, and in the chorus it soars like the best stadium rocker, and bluntly, the same could be said for any of the rest.

That is not to say that they are each without different charm. “Will It Make You Love Me” rockets along like some early Bon Jovi song and deals with having feelings for one of your friends (not something I know about, you understand ….ahem!) “Eighteen Till I Die” is even better and amounts to a masterclass in how this stuff gets done.

Sall – who was the main songwriter here – supplies some wonderful guitar to complement Overland’s voice, not least on “Only Time Will Tell”, while, as ever this type of record needs its mid-paced quasi ballad, and “Tonight” provides one right from the top drawer.

It is impossible to listen to this and not think FM, and to be fair, I imagine that will be fair enough for everyone here too. “Standing Up For Love” sounds like it could be on one of their recent records, while “Something Worth Fighting For” goes straight into power ballad territory and there’s not a dry eye in the house.

It does seem, though, that the band are happier when they are doing the rock thing. “The Sound Of A Broken Heart” is brilliant, and “First Time”, which builds slowly to something of a crescendo, is the perfect balance.

“The Days Of Our Lives” actually lets its hair down in pretty reckless fashion in the context, while “The Way That It Goes” is exactly how I remember this type of thing in the 1980s. Goodness me, it transports me straight back to the school disco, “Cutting Crew’s “I Just Died In Your Arms Tonight” and the 14 year old me trying to pull a girl called Dawn. (that’s true, by the way).

And that, really is sort of the point. No one here is trying to do anything out of their comfort zones – but then, no one asks Harry Kane to play in goal when he can stick it in the net so well, do they? – and would you want this band to sound any other way?

So, are Groundbreaker, well, groundbreaking? No, they’re not, and that’s just fine.