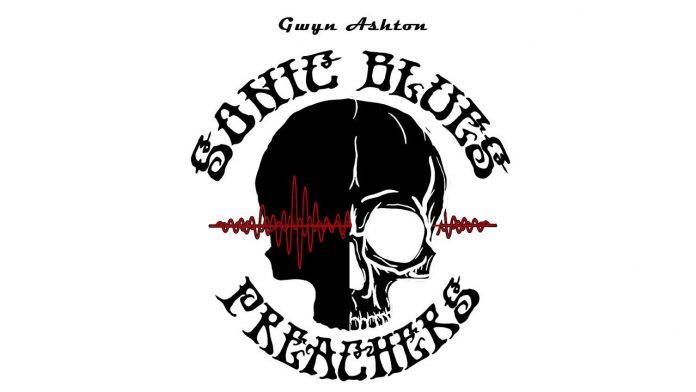 There’s something about them, whether its Royal Blood, or the more earthy sort like White Stripes, or the primal instincts of MV faves, The Picturebooks, there’s usually something interesting about them.

That’s particularly true here, as these nine songs rather prove.

Sonic Blues Preachers is a collaboration between Aussie/Welsh blues man Gwyn Ashton and John Freeman. Freeman was the drummer in a band called “Fraternity”, which featured a chap called Bon Scott who went on to be a touch famous, apparently……

SBP, though do their own dirty deeds – whether they do them dirt cheap you’ll have to ask them. Goodness me, however, whatever they’re preaching seems to be mostly to do with the seven deadlies, and if they’re on their knees, then it ain’t in prayer.

Right from the off of “She’s What I Like” – literally given that the first line is “I got a chick with a kink” – this is fuelled by lust. Like some garage rock take on blues, this has plenty on its mind.

The pair have a chemistry of their own too. Ashton is frequently feted as one of the finest players around – I’ve seen him jam with Walter Trout and it was incredible – and his plugged himself into something positively filthy with these.

“Candy Store” is righteously greasy, “something crazy in the air”, he whispers here. “Coming from you know where…..” and even if you aren’t sure then you can guess.

There is a wonderful diversity to the textures throughout. “Fool In Your Life” has a memorable groove, “Soul For Sale” changes the vibe totally, and is more laid back, but even in its brooding there is a suggestion that it could cut loose at any moment.

A key reason for that is that Freeman’s drumming compliments Ashton perfectly, and the swampy brew of “The Old Fool” comes straight from the delta, but is elevated by the rhythms he creates.

In many ways, that one contains the key too this whole thing. “This old fool,” sings Ashton, “won’t play the game” and maybe that shines a light on the idea that the duo wanted to push themselves.

“Take Yourself Away” has a 1960’s air. Recalling The Sonics in part, weaving its patterns, while the timeless “I Don’t Feel It” lets its hair down. “If it don’t move me,” it goes, “I am cutting it loose” and there is a real feel that this is from the heart.

“She’s Lost Her Power” has a stomp and a bit of soul, but it sounds like its Ashton trying to convince himself that it’s her loss, anyway, and this will show her…..

The collection finishes with “Waiting Game” which has a flavour of the folky, widescreen blues of Mark Knopfler, and it is but another example of the breadth of what this half hour has to offer.

“These two musicians go into a head to head battle” says the details that came with “Sonic Blues Preachers”, and there is a bit of that. But its like Bruce Springsteen used to say: “nobody wins unless everybody wins.” And that’s definitely the case here.