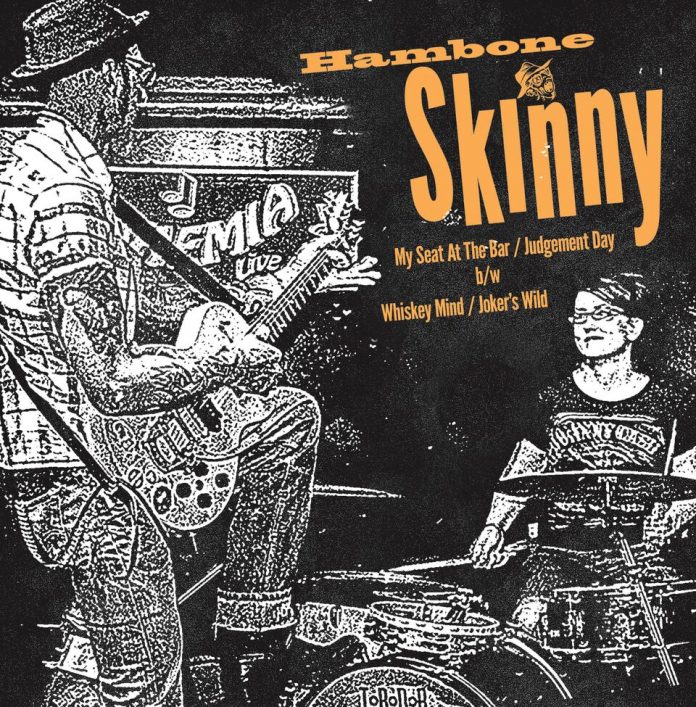 The very start of these 7 tracks is the words: “forgive me Lord, for I have sinned.”

And some 20 minutes later it features a song which manages to make the words: “my baby loves that devilled ham” the most filthy sounding phrase ever.

That, pretty much, sums up Hambone Skinny.

As does this one word. Primal. Or another, nefarious.

The aforementioned opener in effect does what this does throughout. That is to say, if you like the idea that Jon Spencer was a fire and brimstone blues preacher then step right up, or of you thought that Left Lane Cruiser were the dirtiest band you could find, then you might want to think again.

“Born And Raised On Sin” lives up to its name, but goodness me, Hambone can pound a slide guitar and Steph beats the shit out them drums. “My Seat At The Bar” is like some long-forgotten Howlin’ Wolf song – it might be for all I know – while “Jokers Wild” to be quite honest, sounds like it is the product of the boys in Sons Of Anarchy forming a blues band and really letting rip.

“Whiskey Mind” (opening line: “I done drink no water, I just drink my wine…..”) keeps the liquor flowing, and if there’s consequences, then this ain’t thinking of them, nor is it apologising for the mess.

Best of all is the quite stunning “Devil Done Took My Baby”, sounding somewhere in between Johnny Cash at the Sun Studios and a load of punks in a meth lab, it is as low down as this – or just about anything – gets.

As for “Cold Cuts”, the last one, with the meat fixation, its like this: if Leadbelly wanted to know where his girl slept last night, then Hambone Skinny don’t give a toss where theirs was, and they probably want to see the pictures.

When Robert Johnson did a deal with the devil at the crossroads so he could play the blues, then frankly Hambone Skinny are the ones that mugged him down the nearest dark alley as soon as Beelzebub left so they could steal his guitar.

Two pieces always do things differently, that’s certainly true here. Welcome to an album so filthy you may need a shower after listening to it. It’s worth it though, even if its not for the feint of heart.