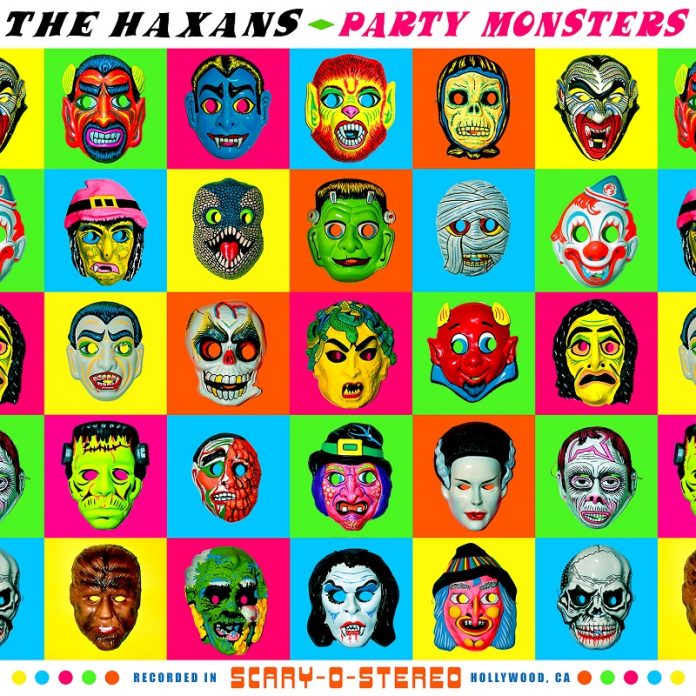 The party that even MV can’t get out of

Parties are always shit. There are no exceptions to this rule. It is inconceivable that MV will voluntarily attend one of these horrid social occasions, much less enjoy it. As we enter the festive season, spare a thought for a bloke who has to save a day’s annual leave just to get out of the work Christmas do (this is not a joke).

So, then why is this website reviewing an album called “Party Monsters” with a day-glo cover evoking the spirit of a rave?

The answer is simple: The Haxans are ace and “Party Monsters” distils the spirit of electro charged rock n roll better than anything has since Grand Theft Audio released the lost classic “Blame Everyone” at the turn of the century.

12 songs and each one a slammer, groove’s courtesy of Rob Zombie bassist and Wednesday 13’s guitarist Piggy-D (he goes by his real name of Matt Montgomery here) and Ash Costello, who is better known as the leader of Screamo mob New Year’s Day, absolutely kills it. Like a strutting, preening hybrid of Paul Stanley and Morticia Addams she ensures these songs are gleaming, lust filled gems.

“Lights Out” is a glam stomper to kick things off, potty mouthed and dumb as all hell, but the catchiest thing since the flu, The Haxans are off and running and, like some hyperactive three-year-old on a two day smarties bender you ain’t keeping up with them.

Most of this only knows one speed and that’s fast. Synth’s rock on “Young Blood” and the chorus is something that Alice Cooper himself (Montgomery has collaborated with Coop on occasion) would balk at and even when it does slow down, like on “Dirty Magic” it only does so to get even more belligerent.

The absolute highlight here is the rock n roll tour de force that is “Black Cat Bone” and you’d best believe you don’t need to be getting in its way. That said there’s nothing that suggests that The Haxans give a toss what you think anyway.

There’s a glorious middle finger in the air vibe throughout, but never more than on “Party Time” which sounds like something the aforementioned Wednesday 13th might attempt, “Chains” is so eerie it manages to make a cowbell sound menacing, and “Witch Wave” is a totally unashamed pop song.

“I Think Of Demons” has echoes of Love Zombies and passes as a ballad in this collection, and is almost entirely built around a keyboard riff, with “Professional Weirdo” would make perfect sense in a nightclub (we imagine, MV doesn’t do those either) but we do know a hip-shaking behemoth when we hear it and this is one.

“Slick Black Coffin” sees terrible things happen to Costello’s boyfriend because he won’t shut up (but you’re on their side so heavily by this point that you know he deserves it to be honest). “Boo”, meanwhile gives you a graphic lesson as to why you shouldn’t cheat on the singer. You have been warned.

“Party Monsters” closes with “Vampira” which not only discusses “grave robbers from out of space” but does so acoustically, and let’s be honest, that isn’t an easy feat. Indeed, it sounds like a nursery rhyme from the depths of Hell.

So will this convince us to go to a party? Not a chance, but if you must inflict a Halloween bash on people then here is your soundtrack. Or put it like this, if you go around to Satan’s for a buffet, the horned one will be singing this.