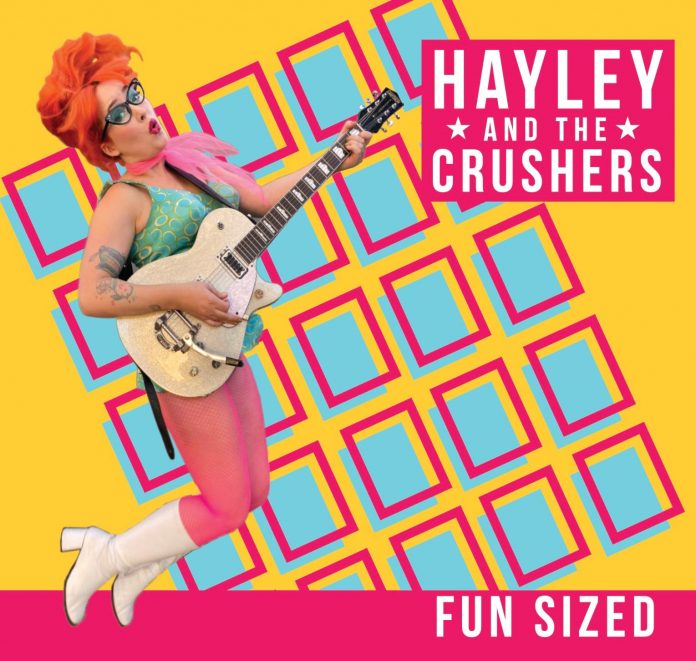 You do know you can judge books by their cover, don’t you? Despite what your mother might have told you.

The point is, that when we were kids, we knew that the red and white Atlantic Sleeve meant all kinds of cool stuff, and my rule of metal bands slogans – simple, if I  can’t read the name of the group then I know I won’t like it – has always served me well.

Which is why, after one look at this, you know what Hayley And The Crushers are going to do. They are music for people who look on the bright side (literally) they are the soundtrack to the explosion at the Skittles factory, they are a day-glo slice of fun in a wicked world.

It turns out that HATC were releasing singles throughout the last year, and our friends at Rum Bar Records have collected the best of them and put them together for your pleasure.

And pleasure it is too. There’s an unashamed 80s thing going on here, like The Bangles have gone punk, or at the very least have been listening to a lot of the Go-Go’s.

“Jacaranda” chugs along like it dreams of being the b-side to “Rush Hour”, and the vitriol of the “screw the small town” hook is buried below a lot of sugar coating.

It carries on in this vein too. “Angelyne” is almost what Duran Duran would have been if they’d grown up in the LA sunshine and not the drizzle of the English Midlands. It also confirms – yet again – my long held belief that there’s no bad song with hand-claps in.

“Church Of Flag” is the most punk rock, as it were. Pulsing with an incessant energy from the off and if it has a sense of mischief then it never goes further than sticking bubble gum to the bottom of the chair type hi-jinks.

“Kiss Me So I Can” likes Elvis Costello. A lot, and its bass groove can’t be resisted, while “Water On Glass” has a bit of a Blondie thing going on, but these are no facsimiles. The organ here ensures that. Hell, even the closing cover of “Susie Is A Headbanger” sounds like The Beach Boys jamming with Eddie Cochrane.

Just as much as the cover of the record is perfect, then so is the name. “Fun Sized” sounds like them little chocolate bars your mum let you have as a kid so you didn’t spoil your appetite before tea. This is the equivalent. A tasty little boost that might just be all you need.