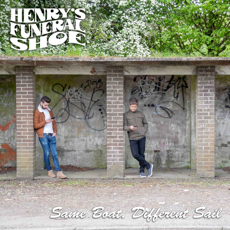 It happens occasionally I suppose, a band that you hear and a band that you instantly love, read the biography, find out that they’ve been around since 2009 and you go: “Ok, how did that happen…..?”

“Smartphone Rabbit Hole” is ace. Ten tracks of raw, primal rock n roll with a soulful, original touch. Their back catalogue has been good enough to get them support slots with the likes of White Stripes, The Datsuns, The Sonics and loads more. It has seen their song “Dog Scratched Ear” on a Fiat advert featuring Charlie Sheen and seen by millions online, and yet – at the risk of invoking a terrible cliché, they’re down there in South Wales as some kind of big secret.

Whether brothers Aled and Brennig Clifford care less is a moot point, given that it sounds like on this record they are too busy making wonderful music to bother.

We may as well start a third of the way through the album with a glorious thing called: “Firing Line” which crackles, fizzes and pulses with electricity, even before the horns kick in. Then it becomes something else, and the truly piercing lead only adds to the overall package.

If that is the high point – it really is – then the rest is superb too. It is obvious, right from the grooves of “Everybody Says Hi” that this record is special. And if I mention references like The Picturebooks or The Graveltones, then that isn’t solely because they are duos, rather because they have the same feel, the same slightly unhinged way about them.

“High Shoulders Everywhere” might be a chance to clap along, but Lurgan’s purveyor’s primal blues, the wonderful The Bonnevilles would be all over this one, while the mighty, “Damn Right I Mean It” is a slab of something crushing. It also hints at an authenticity that could very well be their calling card in truth.

The band, according to their own words were a result of Aled listening to his parents record collection as a boy. One of the bands he came across there were Credence Clearwater Revival, and that shines through on the gentler “Right Time” and if ever you needed to understand that these boys were not quite on the same path as other bands then the defence rests with the incessant bluesy, foot-tapping energy of “Quick As A Hiccup”.

Back 20 years or so ago I heard this sort of music for basically the first time when Gomez released their seminal “Bring It On” thing and there is something about that in the groove of “Same Boat, Different Sail”,  a hum, a fuzz if you will, it sounds timeless and the slide guitar here is just perfect.

It is surprising actually, how nuanced this is considering. “Smartphone Rabbit Hole” takes apart the modern world, but does so over a stomping glam beat, while “The Fear” is a lot less of a maelstrom, more controlled, and the record benefits from this light and shade.

To that end, the final one, the absolutely gorgeous “Ball And Chain” is a slice of countrified almost Americana work, that has the warm summer breeze wafting right through it, it is a superb conclusion to a fine album.

If you haven’t ever heard of Henry’s Funeral Shoe, then do yourself a favour, stop what you’re doing and get on this. If you have, then why have you been hiding them? They are too good to remain tucked away.