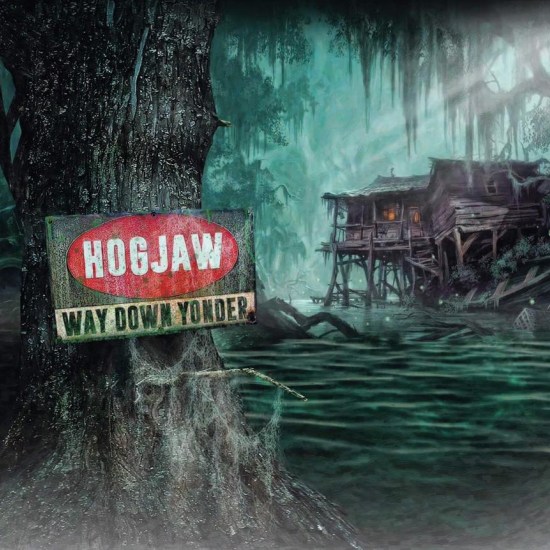 There’s something rock n roll stirring down in the woods

If you were looking for a reason to love Hogjaw (not that you should need one, because for 10 years and five other albums they’ve been ace) then we’ll leave this with you. Their bass player is called Elvis DD. That’s Elvis Double D, which is probably the most rock n roll name ever.

Such an intro would usually be a digression, but oddly enough not here. Because Hogjaw are a rock n roll band to their very last breath. The four long-standing friends look like they were born in a van, playing a guitar and appear for all the world to have been weaned on moonshine since birth.

All of which means that whilst you can tell exactly what sort of band Hogjaw are from the name – like one of those death metal bands with the logos you can’t read, they reveal all their layers right from the get go– and you also know what “Way Down Yonder” sounds like before they’ve played a note, it doesn’t make it any less fun.

How can any record that contains a title track that strides the world with denim clad intent and which sees the singer pistol whip the devil at one point not be an absolute knockout? Particularly when it is played like the Allman Brothers and The Marshall Tucker Band were jamming on Grand Funk’s  “We’re An American Band”.

That’s kind of the vibe throughout too. “Back Home Today” kicks things off in a country type way, albeit given that singer JB Jones sounds like he’s the leader of a biker gang at all times, so there is a rock feel about its stomp, even here.

“To Hell With The Rest” is the kind of middle finger in the air that Skinny Molly do, plus it comes on like the best song ZZ Top never wrote – for the avoidance of doubt that makes it very, very good indeed.

If Billy and the Boys are the best little band from Texas, then these four aren’t far off the best band in Arizona, “Brown Water” isn’t so much whiskey soaked, as absolutely righteously drunk, and it will make anywhere a honky-tonk for four minutes. “North Carolina Way” is a veritable southern rock masterclass, and the lead playing from Jimmy Rose is brilliant. Furthermore, even when they deal with a bleaker subject matter, as on “Dark Horse” they do it in a way that will make Thin Lizzy fans go misty eyed, while “Redemption” reveals a more tender side.

“Got A Pencil” seethes, and doesn’t half sound like something Zakk Wylde would concoct in his man cave. “Never Surrender” is better still as it rages against both fakers in particular and the modern world in general. “Beast Of Burden (Roll On)” ushers itself in on the back of  a formidable riff, while the closing “Talk About Fishin’” sees them round the campfire, playing bluegrass, as you always suspected they might do at some point.

Avant Garde and challenging this isn’t. But that’s why it’s superb. It’s played by blokes who love this music and are very, very good at it. Complaining that you’ve heard it before would be to miss the point. “Way Down Yonder” is the musical equivalent of watching your team’s star striker slot one unerringly in the bottom corner against your bitter rivals twenty years ago on YouTube for the hundredth time. How could you get bored with that? And like that legend, Hogjaw are absolutely bang on target here.