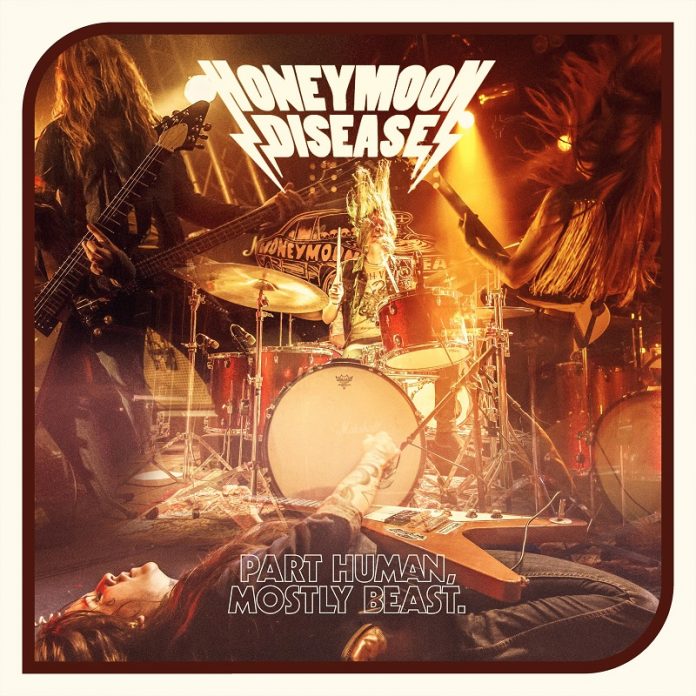 Back in the winter of 2015 MV reviewed the debut album of Swedish four piece, Honeymoon Disease. Upon finding that the name came from “cystitis caused by sexual activity” MV pronounced that the record was “catchier than a STI and a lot more fun”.

Anyway, two years as near as dammit have passed since and HD are back, with a new label and a (slightly) new outlook.

Don’t worry, they are still as rock n roll as can be – look at the cover for goodness sake – but this time there is a lot more soul in proceedings.

Working with producer Ola Ersfjord, who has worked with MV faves including Imperial State Electric and Dead Lord, they apparently discovered a mutual love of old soul and this has most definitely infused album number two.

“Part Human, Mostly Beast” lays its cards down on the table straight away and in the brilliantly ebullient “Doin’ It Again” it has a winning hand. “Only Thing Alive” sees singer Jenna positively relish the fact she’s “about to be locked up and never released” and any song that sounds this much like Thin Lizzy cannot be bad.

They can get bluesy when they want too. “Rymdvals” occupies some shadowy landscape, but does allow Jenna’s fine voice to come to the fore, while “Needle In your Eye” occupies some mid-paced type of Imperial State Electric space.

The band are at their best, however, when the handbrake is off and they are looking for all kinds of trouble, like they are on the quite brilliant “Fly Bird, Fly High” which is so turbo charged it makes Chuck Berry’s “Promised Land” look like a lot of fuss about nothing, or “Calling You”, which might start with some strange sounds, but is soon only headed for the fast lane.

“Four Stroke Woman”, rather like “Fast Love” on their debut album manages to take the car as a metaphor for something altogether dirtier as guitarist Acid (we’ll assume this isn’t his real name) heads off on a lightning trip.

Not that all of this is a million miles an hour. “Night By Night” chugs in – what is for this record – a restrained manner, “It’s Alright” gets all southern rock on you, “Coal Burnin’” takes the mighty bass groove from “Fortunate Son” as its starting point, with the four string of Cedric to the fore, while the lead single from the album, “Electric Eel”, ends things with a glorious hook and something beyond a carefree air – particularly in its closing guitar solo.

That rock n roll can still sound this much fun – and so downright dangerous –  in 2017 is no mean feat. Honeymoon Disease always seemed like they were on course to make this happen. Only this time they’ve been able to marry other elements too. “Part Human, Mostly Beast” is sweaty, gyrating fun and that was probably always the aim.