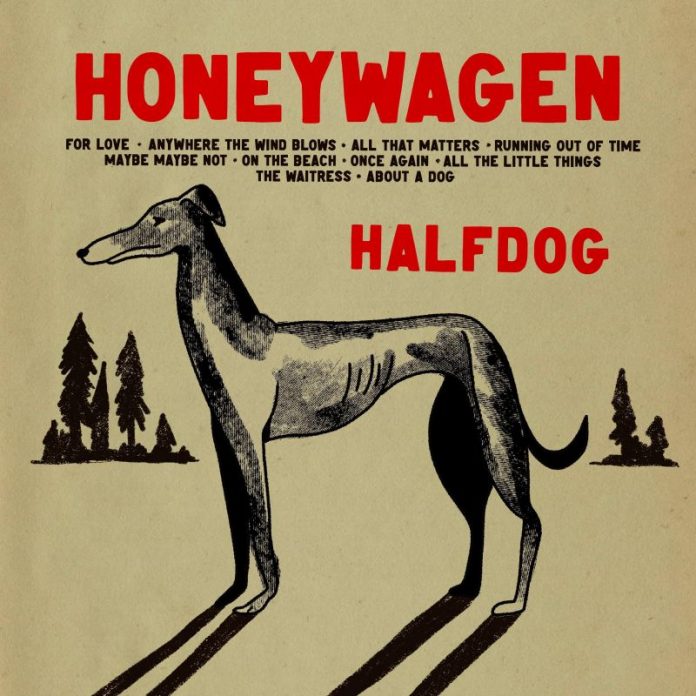 The last thing we all need is reminding of the difficult times we are enduring at present with this virus and we are all having to deal with it in our own way. Music has always been a big part of my life so it`s not surprising that i`m listening to a lot more of it. There are thousands upon thousands of bands out there, but they have to really have something for me to take notice and pay any attention to them. One such band that I’ve really enjoyed discovering is Honeywagen. They hail from Kansas City, Missouri, in the Midwestern United States, have been around since 2000 and have a new album called “Halfdog”, their first since 2015’s “Jamboree” The band Mike Penner vocals and guitar, Scott Christensen on guitar, Gary Charlson on bass and Charlie Pautler on drums between them play a variety of Gibson Les Paul, Fender Stratocaster, Rickenbacker 12 string electric guitars and 60’s Ludwig kits (and Zildjian cymbals) which enhances and evokes an almost early vintage rock sound.

`For Love` opens the album and it`s a wonderful slice of sunshine on a dark day. A love song where you can almost feel the sheer delight of being in love, It benefits from some superb rock out guitar riffs, imagine if The Byrds and Big Star had a lovechild, this would be what I’d expect to find. We get quite an up tempo cut with `Anywhere The Wind Blows`, a more alternative country offering. A song that wouldn`t be out of place in a set by The Long Ryders. The intricate guitar picking is a joy to behold and the harmonies are so sweet you could get diabetes.

`All That Matters` is another song of unrequited love, that has a nostalgic rock sound harking back to the mid to late sixties. The band really come together to build a platform for Mike Penner`s understated vocals to almost float atop. We get chance to pause for breath with the laid back `Running Out Of Time. ` A song of reminiscence proffered In a style that reminded me of the wonderfully harmonic offerings that The Beat groups would so often share.

`Maybe Maybe Not` is a tale of romantic woe and realisation that a relationship that was possibly perilous, turns out as suspected. The song has quite a kaleidoscopic, psychedelic feel to it. I felt `On the Beach` was the most “Beatles-esque” of all the songs on this release but it had some really delicious guitar hooks, drum strumming and Mike`s honeyed vocals. Marvellous.

`Once Again` is a laid-back sleepy offering. An easy going mid paced guitar led piece that comes from waking up alone in the early hours of the morning, in a strange bed, a little out of sorts and lamenting on a disagreement you`ve had with your lover and wishing they were there so you could put it right. An almost perfect pop song follows with `All The Little Things` it`s short, luscious, and even manages to fit in a jangly guitar break. A feel-good song if ever there was one.

`The Waitress` is a little different, a real slow melancholic offering, a tale of the narrator trying to forge a romantic assignation with a server in a diner. Although it was heartfelt, it was the one track that really didn`t gel with me but as they say you can`t win them all. A song that sparkles with life `About A Dog` closes out this release and the guys really know how to crush it. It`s a delightfully upbeat cut with cool chords galore and some glorious harmonies.

These guys are accomplished musicians and their influences are laid bare at times, but I have to say that this long player hit a lot of sweet spots for me. At times it was straight-ahead pure power pop, with a real energy and edge. Then it evoked a time when tender, entrancing, melodic guitar-oriented bands ruled the world. To me, not only are they an undiscovered gem but this release offers a glimmer of hope in a time of struggle.