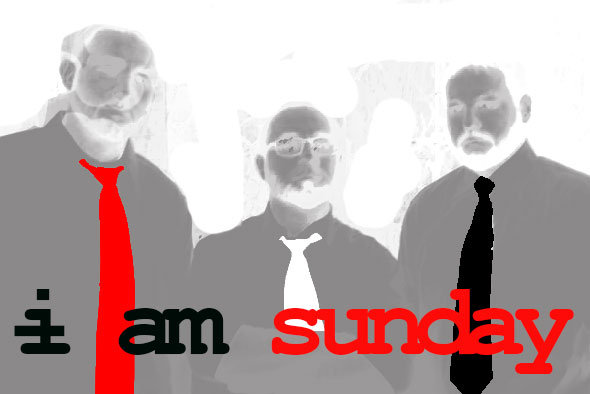 i am sunday are a power trio from Saginaw, Michigan, that consists of Matt Hill (vocals, guitar), Kurt Schade (bass) and Steve Warrington III (drums).

“Digital Residual” is the opening track on this ten song offering. It’s a strange funky metal song with spoken, sung and almost rapped vocals at times. A track to make you consider what’s next on offer.

“What You Are” and “All U Gotta Do” are bluesier tinged funk tunes, where Bassist Kurt and drummer Steve really get to strut their stuff, while Matt gets to grind his guitar on top while belting out the almost hypnotic lyrics.

A more eclectic number arrives with “Feel Good, Look Good” before we get a no nonsense rock out number in the shape of “Away From It” a real head banger of a tune.

“True Love” is a strange more diverse song. An odd sort of off kilter nursery rhyme, with mid song growling and some real rock out moments.

A slightly unnerving piece follows in the shape of “Binary” with odd but compelling lyrics such as “See my life is binary, zero one zero one, a feeling washing over me” I was humming this for an hour or two later.

The final track “Mollify” wraps in all up with a quite fast paced funk / rock trip out.

What can you say? This is a real head funk of an album, with many influences from funk to rap to rock to blues to alternative rock. At times I was reminded of Rage Against the Machine and Presidents of the USA.

I really bought into this album, it was diverse, experimental, intimidating, unnerving, humorous but most of all extremely enjoyable.

I would love to see these guys knocking these tunes out in a live setting.