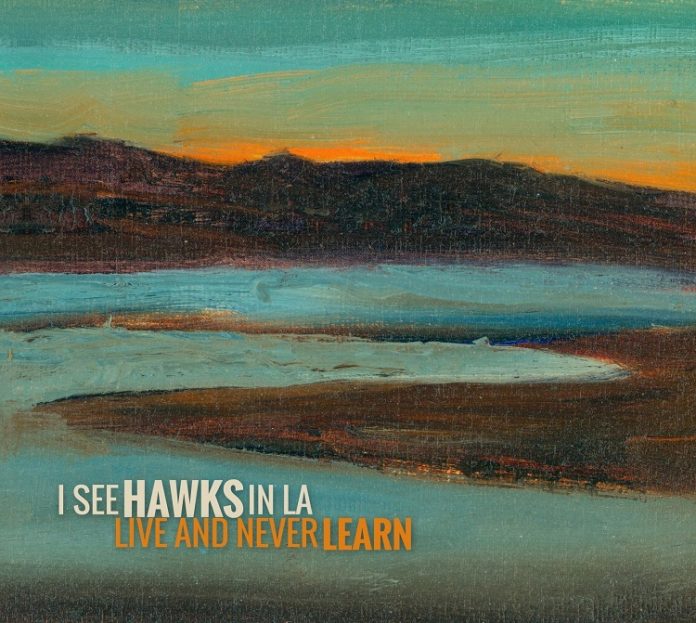 They have been famed, over the 17 years that they’ve been releasing albums – their debut came out on September 11th 2001 – for their lamentations on the natural world. So it perhaps doesn’t come as much of a shock that Southern California’s I See Hawks In LA usher in their first album in five years with “Song For The Trees”.  But for all the talk of “the Acacias, the honeybees” and whichever species of tree they mention elsewhere, this is a song for the people of the world.

Perhaps because they have been through so much in the last few years since their last album – 2013’s “Mystery Drug” (a couple of the band have lost their parents) this is a more personal record than before.

Viewed through this prism, everything else makes sense. “Good intentions, are well and good,” sings Rob Waller on the title track, “but they won’t get you out of the neighbourhood” and it’s almost as IF those traumatic experiences have led them to reflect on their existence – I can certainly recall that when I lost my mum, everything else but that seemed to need thinking about.

Waller and Paul Jacques harmonise wonderfully on the absolute knockout “White Cross” (written with Good Intentions’ Peter Davies), with the deep, rich tones coming straight out of Muscle Shoals, while their apparent desire to play with the formula sees “Stoned With Melissa” – and I See Hawks have always liked an anthem to weed – switch from rock n roll to something more psychedelic, but the twist it takes at the end is most unexpected (and to be fair, I am always going to love a record that has the phrase “sitting in Melissa’s basement with a black and white TV, watching Trading Places, she hates Eddie Murphy” at its heart.

“Poour Me” (sic) is a classic country strum, and an ode to getting roaring drunk – at least ostensibly, but then you need to remember that these boys and lady are a little too subtle for that. There is more of that feel on “Planet Earth”, which is elevated above the norm by some absolutely stunning Lap Steel playing.

Perhaps the best example of their ability to look at things in a way that no one else would is “The Last Man In Tujunga”, it has all the devil may care ebullience of Chuck Berry, but it concerns the fires that saw bass player Paul Marshall almost lose his home (and it has a little Stones homage too). This left-field thinking, though, is natural, not forced, and when they are looking at graves at the start of “Singing In The Wind” it all makes perfect sense.

Drummer Victoria Jacobs narrates her own story on “My Parka Saved Me” and it almost has an air of “The Leader Of The Pack” as she does, while members of Old Californio appear on “King Of The Rosemead Boogie” which rocks and pulses along with a rare urgency.

“Tearing Me In Two” with its Celtic touches is another highlight, as are Jacobs’ vocals on the 60s, West Coast infused “Spinning” that follows in the spirit of The Byrds and their ilk and seems to be floating along. And the fiddle work of Dave Markowitz is quite brilliant on the equally blissful – but in an entirely different way – “The Isolation Mountains”.

“Stop Me” ends the record on a warm, airy note. Its widescreen sounds seem to suggest that anything is possible, and such is the ambition on this album that you couldn’t disagree with the premise.

“Live And Never Learn” is one of those wonderful records that reveals itself in different ways with each passing listen. I could review it tomorrow and hear different things – that’s just how it is made. It is these textures, though, these different strands, that make it so special.