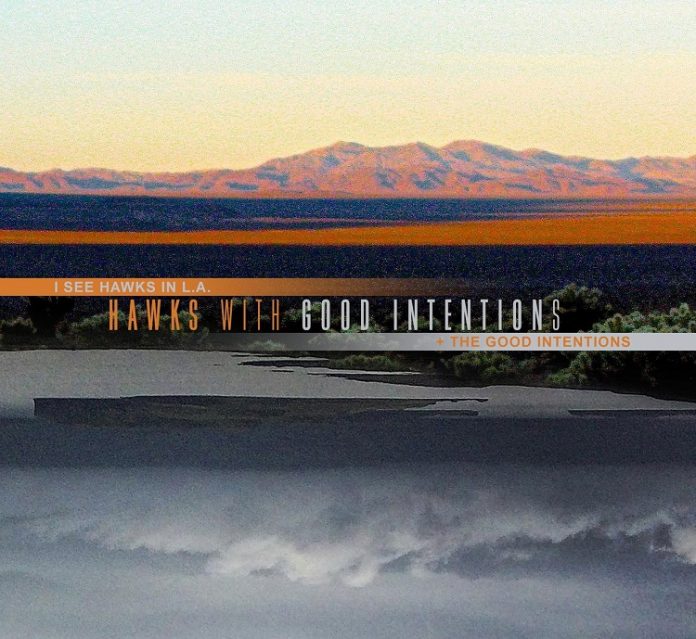 It is like one of those psychological tests, I guess, but proof that you only read what you want to read is right here.

When this came, I assumed – because I read what I thought was there – that “Hawks With Good Intentions” was a brand new record from country mavericks I See Hawks In LA.

I was pleased about it, too, in truth, because their brilliant “Live And Never Learn” record had been a real favourite of mine last year, and they’d played a superb gig last summer. The sort really that the epithets “warm” and “convivial” were meant for.

Because, the full name which alluded me was “I See Hawks In LA and The Good Intentions”. The latter part of this is crucial, as it is the name of a Liverpudlian folk duo, who had struck up a friendship and began jamming on ideas.

Reading between the lines of the press release that came with this, it seems that – although all is friendly so no worries there – there was a bit of a culture clash, and the transatlantic nature of the recording sessions may not have been the best experience of everyone’s life.

The record, though, retains all the warmth of ISHILA and the harmonies of TGI, which is no mean feat.

These type of records are perhaps more common in the digital age, but you wouldn’t necessarily know here, and “….Intentions” certainly sounds analogue rather than cold like a download or an MP3.

It kicks off in beautifully gentle fashion. Peter Davies of TGI takes the lead vocal here, but there is a lovely summery, sea breeze here, like it has all the time in the world.

What follows, is a world away, but also shows the breadth of material not just here in general, but folk in particular. “Things Like This” sung by Rob Waller (the original idea for the record had seen it’s genesis in the I See Hawks’ singers house) and it is a murder ballad in the great tradition. Truly a highlight, as well.

“Rolling The Boxcars” – one of the first ideas they came up with – is a duet between the two men and folk in the way Woody Guthrie intended, “Ramblin’ Girl” is carried through on the back of some wonderful fiddle from Gabe Witcher from The Punch Brothers and folk doesn’t get any more evocative than “Steel Rails”, which has a touch of Mark Knopfler in the guitar lines.

Victoria Jacobs’ gorgeous vocals take centre stage on “Hills On Fire” as she melds beautifully with the accordion, and so timeless is “White Cross” and its country blues, I genuinely had to look up if it was a cover. It isn’t, but it is an example of heartland music right from the top draw.

When I was a kid, at my grandma’s for the weekend, she’d often listen to the request show on local radio on a Sunday morning, and a lot of what was on was country seemingly infused by a waltz-like quality. As such “Flying Now” resonated with me, and an example of the quirky nature, perhaps, of the songs on offer is on “Epiphany On Town Hall Square” with its new take on the nativity.

“Will You Watch Over Me From Above” which ends things here, will strike a chord with anyone who has lost a parent, and it is very obviously a heartfelt take on the grieving  – and healing – process.

A fantastic album. That bit you might have expected, if you know either (or both) bands. Put them together, though and it is pretty unstoppable.