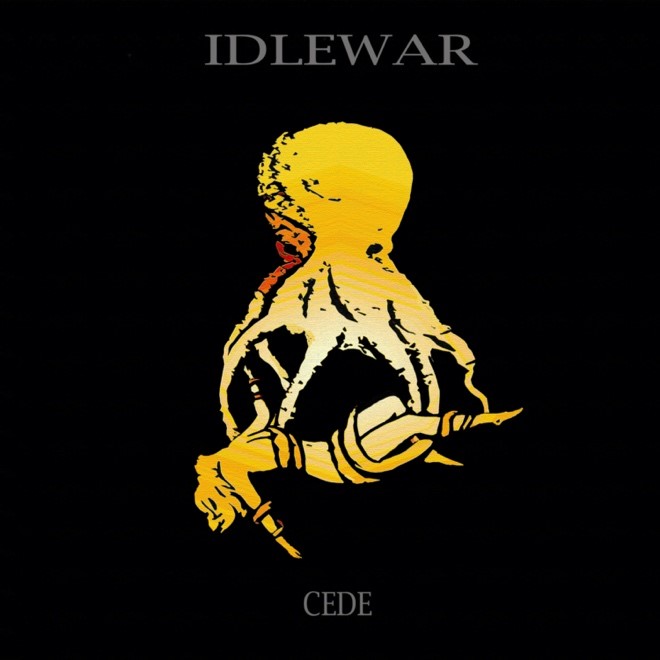 As a starting point of this review, I looked at what I had to say about their last album ‘Fractured;

‘Compared to previously releases Fractured is a bit darker, a little harsher and not quite so immediate. However, persevere and the layers of the songs start to be revealed and it’s clear that this is the hardest rocking set they have produced.’

This is even more applicable to this new release and in the turbulent times we live in, Cede shows a dark and abrasive side to their music that had been kept in check before but here it is unleashed to full effect. Consequently, it’s a much more difficult listen and it’s taken me many plays and over the past few weeks to really appreciate this record’s qualities and get into the songs. The reward for that effort is now paying off, as it’s clear this album is as good as anything they have done to date.

The Band, James Blake on bass and vocals, Rick Graham on guitar and Peter Pagonis on drums, have long shown their Soundgarden influence and to my ears that is the obvious starting point for so much of the new material. However, it is combined with a real swing to the drumming that reminded me of Steve Gadd’s work with Steely Dan. That may sound like a strange comparison but there is a lightness of touch around the drum kit that many other modern-day drummers from the ‘Animal’ school of drumming would do well to follow – less is more! James Blake’s vocals again show just how underrated he is and add in a procession of bone crushing riffs from Rick Graham and all the Idlewar ingredients are here.

The album opens with ‘Pound’ and it is one of the more straightforward songs of the set. A mix of a quiet verse and loud chorus always works and the chorus riff in this instance is brutal. However this is just the starter for the main course and that arrives in the shape of ‘Bullet’. This song is up there for me as the one of their best ever of their songs. A staccato riff and drum pattern underpin the song; add in great lyrics and vocals along with a piercing solo and this is sure to be a fan favourite.

‘My Hesitation’, the second single from the album, follows and it is immense. A descending chord riff is the main feature of the music and the mix of quiet and loud is beautifully balanced. Throw in a tasteful slide lick or two, more masterful vocals and a guitar solo steeped in the blues and everything Idlewar is present and correct.

‘Hey Old Man’ was the first single from the album and this forms a trinity of songs with ‘Bullet’ and ‘My Hesitation’ that shows the band at their very best. ‘Hey Old Man’ is on the face of it a more straightforward song and is perhaps a bit more Pearl Jam than Soundgarden. That’s no bad thing as a little commerciality is a great counterpoint to the noise and aggression of the two preceding songs. More high fives for the drumming on this one, capped off by a mini solo mid-song that is more Stax than hard rock.

There is no time for a breather though as ‘Bullfight’ and ‘Scratch’ are up next. Both are heavy, dark, brooding songs with ‘Scratch’ in particular hitting the heights – the musical link into the solo mid-song is Idlewar at their best.

‘Heal Me’ follows and doesn’t let up – fast pace with a machine gun riff, this will become another fan favourite as it is heavy and funky in equal measures and features a great guitar solo. This is the first of a second trio of songs that combine to lift the album to another level.

‘Burn The Diary’ gently fades in and it almost sounds laid back alongside the other songs. However the chorus when it arrives riffs with the best of them and the overall song has a real Pearl Jam/Temple Of The Dog feel to it – it’s great.

‘Forsake’ follows as the third of the aforementioned trio. My ears picked up a Led Zeppelin influence on the music and the main riff hits that sweet spot in the brain that appreciates such things. I also found it one of the easier songs on the album to ‘get into’ as it is a little less abrasive. It needs to be as well because ‘Identity’ follows and this is Idlewar on full power. Driven by a thunderous drum beat and riff, it’s Idlewar at their heaviest and though it doesn’t have some of the subtleties of the three songs that came before, it wins through on sheer grit alone.

The album closes with ‘Salvation’ and this is the song on the album that I’ve taken the longest to appreciate. The song starts off quite gently but once it gets going, the harshness I referred to earlier is used on full effect and the cacophony of noise is not an easy listen.

To try and rise above the masses, Idlewar have thrown down the gauntlet by recording an album of new songs that is a purified version of their music, made without compromise. Idlewar have built up a small but loyal following off the back of their previous albums and those fans will absolutely love this record.  In a marketplace that is awash with new music, it won’t be easy getting these songs to new fans but all any Band can do is their best and in this instance, Idlewar have delivered yet another masterpiece.