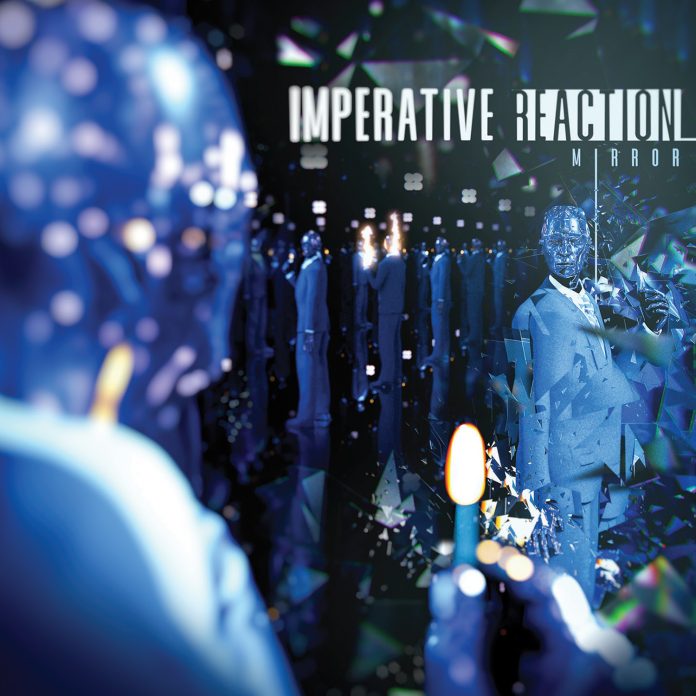 After a decade, Imperative Reaction returns with their long-awaited seventh album “Mirror”.

Imperative Reaction is an American electro-industrial band founded in 1996 by Ted Phelps and David Andrecht from the remains of the band Digital Neural Assault. The band blend emotionally intimate, anthemic electro-EBM (Electronic Body Music), electronic music that combines elements of industrial music with dance music. It developed in the early 1980s in Germany and Belgium and came to prominence at the end of the decade.

The album opens with `Split` and it`s a superbly heavy introduction with thumping drums and a hypnotic synth beat. Ok there were hints of `Head Like A Hole` era Nine Inch Nails but it had its own quite dystopian feel. The theme reflecting possibly as to inner turmoil with a lyrical observation of “which one is real? Who’s the reflection?”  There`s a faster pace to `When Here Is Someone` a real danceable tune in which the vocals float up and down throughout the song and have a subtle heart-breaking feel at times, a song of self-reflection possibly.

`Glass` is another hypnotic verging toward aggressive submission which did tip it`s hat to Depeche Mode`s `Enjoy the Silence`. A narrative of trying to rectify or repair a relationship but being unable to reach through the glass, a metaphor for one`s indecisiveness or cowardice. There`s a pounding, racing, high energy texture to `Alter Ego` another introspective number about either finding or demonstrating an alternative or other self.

`The Scales` had quite an elaborate structure with some strident beats that had an underlying sense of unease especially with the hollered almost shrieked vocal delivery. Although there wasn`t the threat or menace of the previous track `Stranger` again had an intricate series of synth and drumbeats. I really enjoyed the elements where the song slowed and then had a beat that felt like it was plummeting. Wonderfully effective.

Ted Phelps has shared that `Like Swine` came to him as he was reading an article about a poor kid who committed suicide due to being bullied online. “Technology is great, and it has completely changed our entire world. I would not be making the type of music I make without it. Unfortunately, though I think there is a darker side to all of it and I see it often in the way people act on social media”. This submission has a hard-hitting assertive musical backdrop reflective of the subject matter. We have a similar belligerent feel to `Ignite` which does seem to incite and provoke an inferno.

`Intertwined` and `Disavow` are both more melodic offerings and allow Ted`s rich vocals to really shine. The former would seem to beseech and encourage you to make the best of the time you have, and the latter reflects on how you grow as you mature with time. They both seem to strike a heart-rending but ultimately hopeful and uplifting emotive nerve.

The album concludes with `Half Of One` which is a mid-tempo quite thoughtful piece that seems to be a self-analytical narrative that aims to correct their own shortcomings.

I have to say I do enjoy the Industrial metal, electronic rock, Electronic body music that Ted Phelps and Imperative Reaction are pioneers and innovators of.  There`s been a decade long gap in releases but it has not quenched his desire or ambition to deliver a contemplative, probing, rousing and emotional composition with “Mirror”

A long time coming but worth the wait.