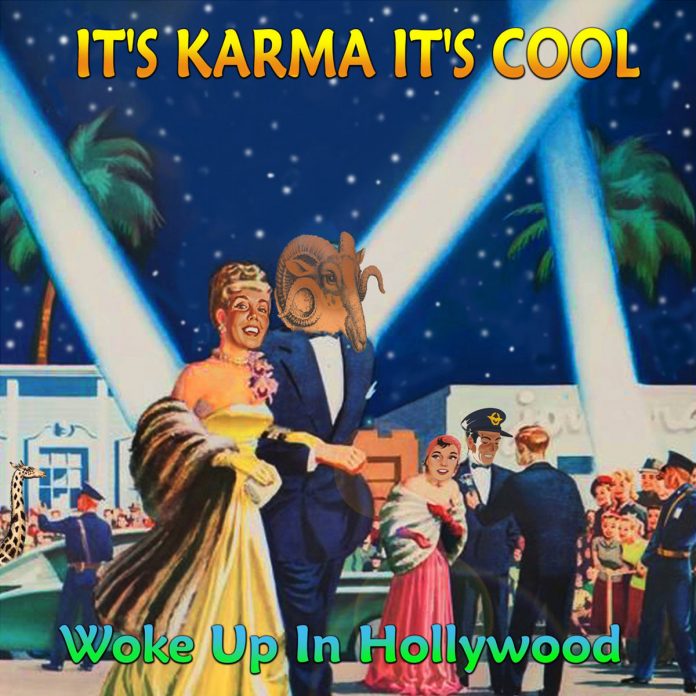 It`s Karma It`s Kool are a power pop quartet based in Lincoln. They released a widely-acclaimed EP last year “Hipsters and Aeroplanes” and have now followed this up with their debut full length album “Woke Up In Hollywood” The band comprise of James Styring (vocals), Mikey Barraclough (bass, additional guitars), Martyn Bewick (guitars) and Danny Krash (drums, percussion)

The album opens with ‘Our Love Is An Amplifier’ jangly guitars, a repetitive drum beat, and some cowbells thrown in for good measure set us up for this delightful slice of pop sunshine.

The song stops just over the halfway mark but then returns for more of the same. I loved the infectious chorus of “our love in an amplifier, turn us on take us higher” and the melodic shouts of “Turn us on” at the end. I thought `Bubblegum Monsters` had a slight Strawberry Alarm Clock “Incense and Peppermints” feel to it. A bass and drum led tune that enjoyed some charming harmonies and some occasional handclaps. Wonderful.

`Back In `78` seems to be about looking back on growing up and all the dreams and hopes one had. A tale that seems to hint at a lost romance that possibly could have been the one.

There are some subtle guitar licks, hypnotic drum snatches and alluring harmonies which lay a platform for James`s vocals which have almost a longing but acquiescence in them. The title track `Woke Up In Hollywood` has a buoyant feeling about it with jangly guitars, layered harmonies that put me in mind of bands like The Byrds. The subject seemingly a dreamlike aspiration of ending up with the object of your desire.

I really loved `Wooden Buddha` a wonderfully melodic offering that reminded me of the superbly constructed type of songs that The Hollies put out such as Carrie Anne. The lyrics were a little curious and trippy including references to light beams, solar systems, satellites, and rocket men and at times seemed to be wishing to seek out a love interest, but the music is such a dream, that can be forgiven. We even get a snippet of a Buddy Holly interview about the Crickets at the end, as to why, who knows. Another enjoyable power pop tinged track follows with `The Girl Who Gave You Everything` which has the added bonus of the standard bearer for Power Pop Lannie Flowers adding his guitar virtuosity.

`American Sushi` is a laid-back offering with some nice languid guitar riffs and drumming with lyrics that were beyond me. I found the chorus interesting when “sasumi” was repeated after the line “We eat American sushi” maybe a play on the words “so sue me”? I wasn`t expecting the ska flavoured `New Age Eve` but it was a nice change and had some cracking horns.

There was a real Merseybeat quality to `Healer`s Leap` aided by Rex Broome again adding twelve string and Brian Barry from The Flaming Cortinas supplying harmonica textures. Another composition that had a sort of sixties beat song vibe was `Ghosts Of Rome` which had some really enjoyable harmonies.

`Battle Of Burnt Out Bliss` seems to have it all, a real big sound, orchestrated at times with strings and piano and even a Spanish guitar relating a tale of looking back on former times. The album closes with `Sunflowers` which seems again another song of reflection on maybe happier times set to a quite rhythmic tune. The sunflower symbolises adoration, loyalty, and longevity, which seem to be covered within this number.

“Woke Up In Hollywood” was a really interesting debut that has some captivating melodic tunes with lyrics that were a little off beat at times but these songs were played by really talented musicians and sung by somebody that has a rich and varied vocal range. In this time of anguish, this is an album that will let you put your problems on hold and place a smile back on your face.