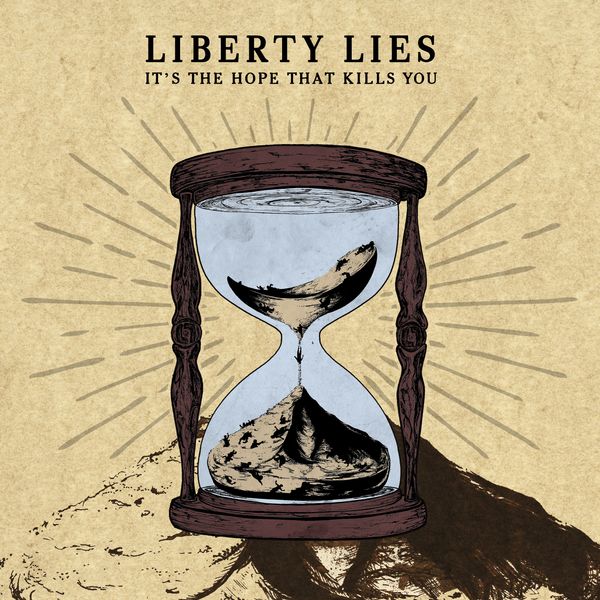 They are brilliant, and often you can tell so much from them. They set the tone. Make a statement.

This one, for example: “Beauty is in the eye of the defensive, welcome to the age of the offended…….” Which ushers in “United Nothing” and therefore “It’s The Hope That Kills You.”

Fabulous. You know straight away this is a serious piece of music, one that is classy, and has something to say.

There, that’s pretty much the review done.

But they usually want more than that, so it’s handy really, that “It’s The Hope That Kills You” is so good.

Ironically, given the content of the content of the song, when I went to put the video on the website in the summer, I found that YouTube had banned it for “hate speech”. Now, I don’t know the guys from Liberty Lies at all, beyond saying “hello” to them over the years, and sitting stage left the other week as the drummer from Electric Eel Shock decided to play their set with no clothes on (to be fair, we just shared shocked looks), but “hate speech”? Nope. Kinda backs the point of the song I suppose.

So if the start is a cracker, think modern, crunching, slightly downtuned rock with a chorus that wants to get into arenas, then happily the rest of it is too.

“Four Walls” pulls off a trick that many of them do, it sounds grandiose and a cut above the norm, but remains entirely accessible. And “Mouth Breathers”, rather underlines the idea that this is, if you like, “thinking man’s rock”. “I am so sick of the daily deceivers” muses Shaun Richards here, and this is a world away from the good time rock n roll, maybe/baby lyrics of some of their obvious peers.

Some, like “Different Tongues” (“what on earth is going on, for men are preaching greed is god”)” would, if it was a US band, be enough to get people talking about the next big thing, but then, the lovely ballad “Letters” rather shows both the blessing and curse of having a record like this.

Firstly, LL have been around for years and years. More than a decade, and this their second full length record. Like the 2015 EP that I also reviewed, it is fabulous, but pretty much, I’ve heard these songs so much over the last year that I could have reviewed it without much listening. They have been playing them, and they’ve been playing a lot more shows. This is a good thing, but because they are so seasoned these days it might be harder to get noticed.

The title track is a real thumper. Fists up. Strident. The bass groove of “The Day Is Done” is both filthy and funky all at once, and the much slower “Family Tree” seems to hide a real darkness, as well as sounding nothing like anyone else.

The shades here are subtle, but the dynamics change throughout. “Coming Home” would probably be called by people cleverer than me “alt. rock” or something, but it has a piercing guitar line of real class and “These Dark Days” is probably the best of the lot actually, because of the about turn it takes, with a brooding, soulful air and to pull off a slow building epic of over seven minutes takes some ability.

“Are You Listening?” is as different again. A three minute thing with a soaring air, one of the first tastes of “…People” it remains one from the top draw. It is typical of the band and their current thinking that the one that ends the album is “Align”, a more gentle, reflective thing, it is somehow in keeping, especially when it turns into some Biffy Clyro thing before the end.

The other week I reviewed a new album by another Black Country band that has been around for ages, and said of Piston that their time is now. That applies to Liberty Lies too, and in “It’s The Hope That Kills You” they have a collection to make that the case.