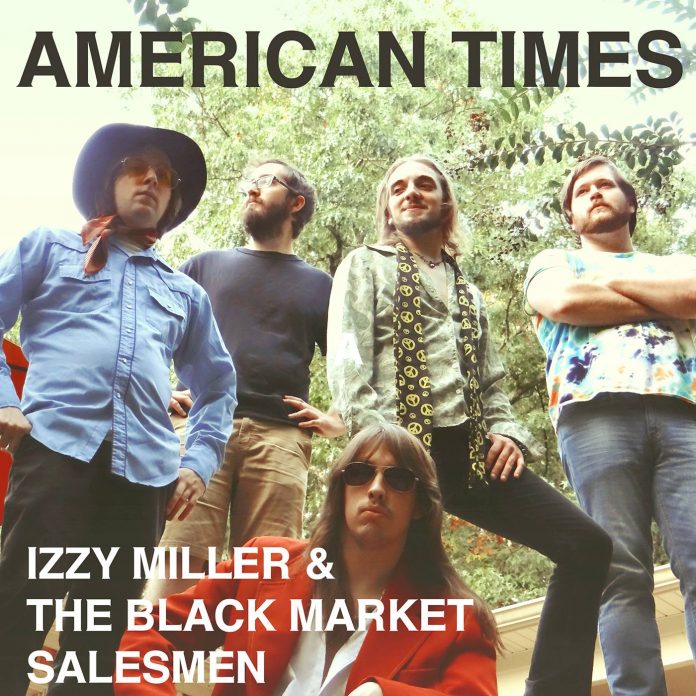 “So let’s go out tonight, see if they recall my name, been a few long years, but I’m back in the game”

Sometimes you just know lines mean more than most. So it is with that one – which comes towards the end of “American Times” on the track “On Top Again”.

As that might indicate, Izzy Miller had a couple of hit singles then basically, for the last three years retreated from view altogether. Based on the rather glorious six tracks here, his continued exile would have been a real shame.

He’s “back in the game” with a new band of talented reprobates behind him, and The Black Market Salesmen help him drive a hard bargain here.

He ushers himself back in with the wonderfully confident “Mr. TV Man” which takes apart the American talking heads over a timeless organ led groove and harmonies that scream ebullience. Lyrically modern, but as far as music is concerned, this is perfectly happy if the last three decades hadn’t existed.

That is not to say “American Times” is some dated thing, though. The title track manages to sound gritty and blue collar, recalling MV faves from the last decade, Marah, and the lead guitar here has more than a hint of Warner E Hodges about it.

There is no doubt, either, about the record’s most ambitious turn. “It Just Happens, I Guess” features the keyboards of Joey Huffman (Matchbox 20) and the duet vocals of Tawny Hills. The organ again is the engine here, giving the track an almost trippy, widescreen feel.

It just shows the skill of everyone involved here that each song is slightly different. “One Day” is the kind of three-minute power thing that The Trews do in their sleep, but interspersed with the kind of lines that suggest at real heartbreak. And it would strike a chord with anyone who has ever “waited for you at work just hoping to say hello”….Not us you understand. Its not like we bought a shit load of records we didn’t need in HMV in the late 90s…no sir….

The sense of longing, wanting something different never leaves this either. “American Times” ends with “One Night Stand” – a track that would make Steve Earle proud – and finds Miller searching for more.

A brilliant return, and more to come, you sense. Izzy back? You bet he is. This is his Times.