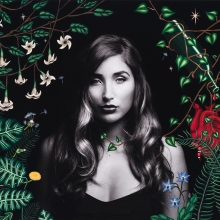 Doing things in the first person is a decision that needs taking.

When I started doing this website, five years ago, for example I rarely wrote the letter “I”, preferring instead to hide behind other things.

There are perfectly valid reasons for doing this. crikey, Springsteen, the greatest singer/songwriter of them all, uses characters to convey his stories. He fools no one, and everyone who’s ever listened to “Bobby Jean”, say, can pretty much have the opinion that it is about Stevie Van Zandt leaving the band. Likewise, I read an hypothesis from Justin Townes Earle (Steve’s son) that his classic “Goodbye” ballad was actually about heroin.

“Wilderness” is Jade Jackson’s second record, and like the debut, it is superb. It does have a key difference, though. Namely, you feel she’s revealing a lot more of herself personally this time. Sometimes jarringly so. It works though, in a cathartic sense. Like all the times I write album reviews that you read back and go “what did I say that for?” then you’re kinda glad you did.

“Bottle It Up” the records both first single and first track is a case in point. “I don’t need a man’s hand to open the jar” she sings here and in so doing she’s asserting her independence maybe, and showing that this is a different record.

It is still brilliantly simple, and its country flavours recall the work of Hannah Aldridge (who’s records led me to Jackson’s debut in the first place) but like Aldridge, she isn’t doing this exactly like anyone else.

In JJ’s case – and here she’s again working with Social Distortion’s Mike Ness as producer – she adopts a real pop flourish. There is, for all the tip-toeing down the dirt roads here, a vibe of something like Kirsty McColl about “City Lights” and the feeling that we could be looking at a real crossover star here is all over “Don’t Say That You Love Me”.

There is a darkening of the mood on the record by the time of “Multiple Choice”, and if you remember Joan Osborne from way back when you might recognise some of the musical vibe. “Should I follow my dreams, or follow my heart, now you’ve torn them both apart?” she wonders – possibly alluding to the heartbreak and consequent stoicism that is woven through this like a thread.

“The Wilderness” is 12 songs that manages to hit on many vibes in honesty. Not least the groove of “Now Or Never” and the West Coast vibe of “Tonight” which is shot through with sunlight but belongs in a dark place “boys like you, make me wanna spend my nights alone” is a key line and on “Dust” the tinkling piano only adds to the sadness.

“Long Way Home” – if I was a betting man, anyway – seems like the most confessional. “nine times out of ten I take my own cab home” confides Jackson, and whether the tenth cures the depression that seems to drive the lust, only she can answer. Judging by the following “Loneliness”, you assume not, but the nature of these songs is such that you feel you can have these opinions.

On “Shiver” she asks plaintively whether she’s tough enough and arguably with the strident drum pattern of “Secret” then yes, not only is she, but she’s probably the next massive country pop star.

She’s modest about it all: “I know where I want to go—I can visualise it—but right now I’m walking through the wild, still picking up tools, still learning, and making my way.” Says Jackson on the notes for “Wilderness”.

That’s the same sort of understated class that is prevalent throughout these 12 songs. Trips to the unknown are rarely this interesting.