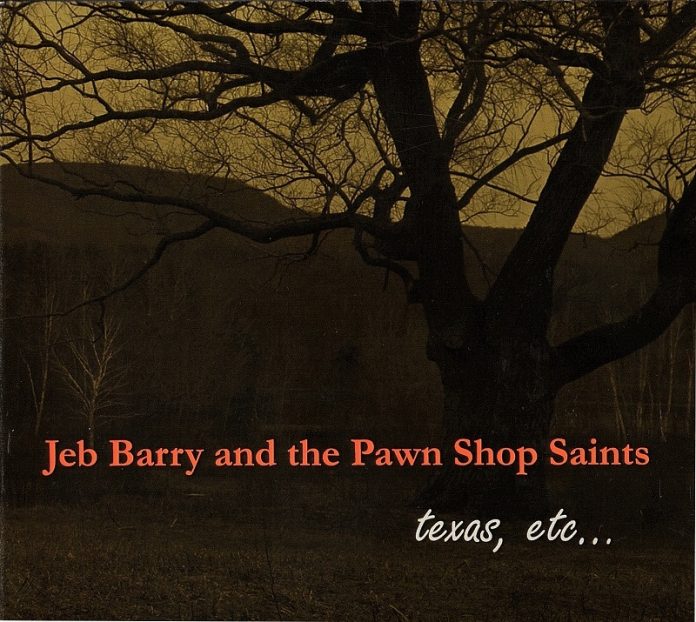 Jeb Barry is from New England, and he’s a singer songwriter. So you’ll forgive us if we paraphrase the great Billy Bragg. Because for much of “Texas Etc” it seems that Jeb doesn’t want to change the world, he’s just looking for any other girl.

And goodness me, there’s a lot of “Texas Etc” to get through, because it’s a double album and here’s where it gets clever, because really it’s two albums in one. Disc one – “The Sainted” is a band effort. Disc Two – “Saintless” is a sparse, basically acoustic record. We’ll get to that, because each has its particular charms, and largely the theme running through both is someone broke his heart and he hasn’t really got over it.

It might be the same girl who told MV getting on for 30 years ago that she wouldn’t go out with your humble reviewer if – and I quote here – “you were the last man on earth”. It might be the different girl who 25 years ago used to bitch about her boyfriend to you at college when you had written a song about her – it might be actually given that “I Can’t Live In Houston Anymore” paints that exact scenario – or it might be the different girls who you can’t quite let go, even though you know you should and the whole thing is ridiculous. There’s a song for that too, it’s called “It Seemed Like A Good Idea At The Time” – a duet with Heather Watson – and it’s brilliant.

The point I am making here is that everyone has these stories of Vicky’s, Helen’s, Jacquelyn’s and Kathryn’s (and to borrow a line from the song, using their real names seemed like a good idea at the time…..) but not everyone can make the sorrow so brilliant – that’s where Jeb Barry comes in.

Because, make no mistake, “Texas Etc” is stunning. Whether it’s in the bluesy nihilism of “Trouble In Tennessee” – the cut that kicks us off here, or any other you care to mention, it really is superior. “Girl Never Loved Me” is like Steve Earle at his best, with its harmonica drenched thoughts, while “Miss Mississippi” has a real punk rock lip-curl, “If This Heart Had Walls” has a Jesse Malin thing going on, “Home” is the realisation that the grass ain’t always greener, but is infused with a wanderlust nonetheless and it encapsulates the unhappiness at the core of this.

“Gravel Roads And Whiskey Bars” (opening line: “life is hard and it won’t get better, I swear”) is more or less perfect rust belt Americana, while “Keep The Devil Away” has a Faces streak, perhaps showing the twists and turns on the opening disc at their best.

Disc two is just you, Jeb and whichever memory you choose. It is marvellously done, though. “A Little Mercy” has more than a touch of Jason Ringenberg, “Southern Oak” is the tale of a man who is searching for his place in the world and “El Paso Sucks” is absolutely heart-breaking in its fragility.

A performer with many, including Sarah Lee Guthrie’s Hoping Machine ensemble, and the album finishes with a solo version of “Refugees” an anti-racist song that Barry has played with them and it gives the collection a hopeful, uplifting conclusion.

But “Texas, Etc” is two discs that couldn’t end with light at the end of the tunnel and there’s a bonus track too. “Speedtrap Town” is as desolate as you like, before the payoff: “I hate to admit, just how I know” sings Barry, “ But I was raised in a speedtrap town.”

In a way, we all were. That’s why although this record is called “Texas, Etc” it belongs to us all. All the memories you don’t admit have a soundtrack. Thanks, I think.