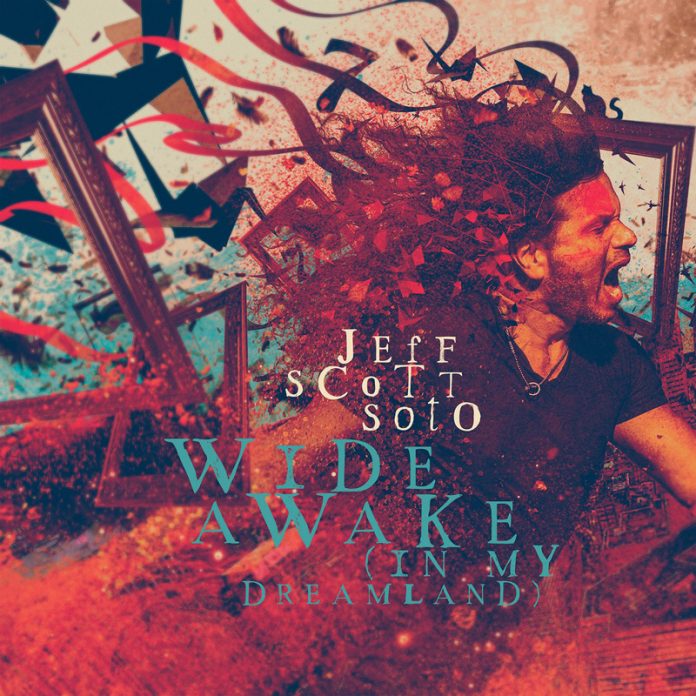 We went to a cricket match at Jon Paul Getty’s gaff once. Gorgeous ground, at his house in Buckinghamshire. “There must be parts of this he’s never seen” reasoned my mate as we surveyed the estate. He had a point.

On a related topic, I always wonder just how someone like Jeff Scott Soto keeps up with everything he’s done. “Wide Awake (In My Dreamland)” is his 7th solo album, but he’s been involved in over 80 releases.

Last spring I reviewed one. Soto (that’s a band) stuck out “Origami” and it was brilliant, muscular, almost Symphony X type stuff in parts, “Wide……” is more of a halfway house. Harder edged than most melodic rock, but melodic rock nonetheless.

For this one he’s teamed up with Alessandro Del Vecchio (Hardline, Revolution Saints etc) and that’s a key to what this sounds like. In short, it is shot through with all kinds of class.

And also, in absolute candour, if you don’t get slightly grandiose hard rock (think FM with some added pomp) to start with, then you aren’t going to get this, either. In fact, give yourself the first 19 seconds. That’ll do as your litmus test. Because in that time the harmonies have stacked high, there’s been one of those solos you only get in this type of song, and JSS has sang.

And my goodness, what a voice he has too. It almost doesn’t matter what he sings, because he can make it sound superb. There are 11 songs here that prove that. Plus, they could all basically have come off the second Bon Jovi record.

“Mystified” is proud of its 80s sounds, and why not? The backing band for this is clearly born to do this sort of thing, and this sort of music hasn’t sounded better anywhere in 2020 than on this song.

“Love’s Blind” adds a bit of a darker guitar line, and a bit of a wider soundscape. Bands like Edguy have made a career out of this, and ok, I admit that when the piano of “Without You” started up, I did end up thinking of Heart in about 1988 (in the interests of full disclosure this is not the first time I’ve considered the Wilson sisters…..) but, if you are going to do an OTT power ballad, then you might as well go the whole hog, right?

Indeed, there’s nothing about this that has anything approaching less than maximum effort. “Lesson Of Love” basically ploughs the same furrow, but “Paper Wings” is different again. Proper muscles are flexed and this grooves. Oh and if you’ll forgive the on the nose pun, the chorus soars.

Scanning the tracklist, I’d assumed “Love Will Find A Way” would be some kind of tear jerker, instead it adds a funky type of sleazy riff and you can pretty much expect David Coverdale to mug Soto down the nearest dark alley to get “Between The Lines” off him (of course, if I was the facetious sort I would point out that there’s no way Dame David could sing this these days).

It’s striking how strident this is, and how confident work like “Living In A Dream” comes over. It is totally sure of itself. The title track adds some religious imagery over something close to Adrenaline Mob, proving that in truth, this could have been anything it wanted. The last one, “Desperate” appears to dust off some kind of Sons Of Apollo type stuff, as if to exemplify the idea that in many respects this is a record that rather ties up the loose ends of Jeff Scott Soto’s career.

Essentially, if you like any of his projects then there’s something for you here. If you don’t, then you probably haven’t read this anyway, but that won’t give Soto any sleepless nights given how comfortable he sounds throughout.