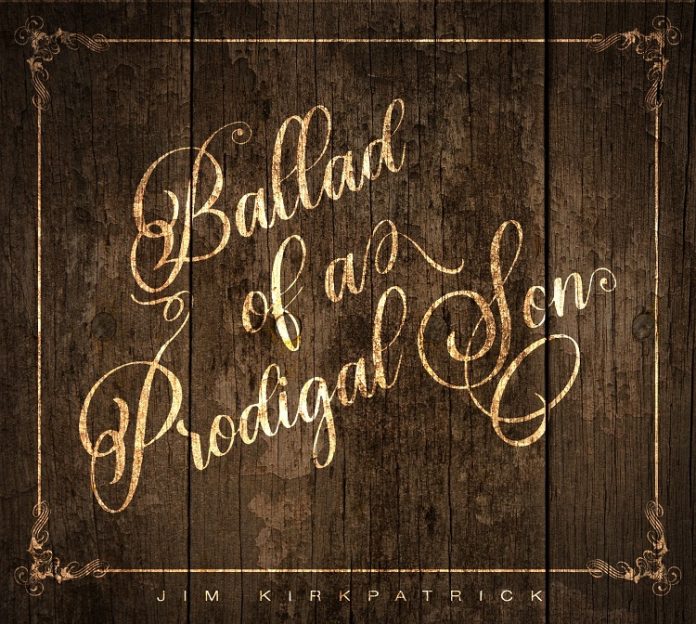 A look at the special guests list on Jim Kirkpatrick’s first solo record for 14 years tells you we are dealing with an A-lister. John ‘Rhino’ Edwards; Steve Overland; Bernie Marsden; Jem Davis (FM); David Levy (Rory Gallagher); Richard Newman (Rory G, Paul Rodgers) Didge Digital (FM); and Neil Murray (Whitesnake) are amongst the many that have turned up for this.

And why? Well, the respect that Jim is held in probably, and rightly so. I’ve said this before and I’ll say this again, if there’s one of the core beliefs of this website it is this: FM are ace. One of the most underrated bands in the world. And I’ve seen them many, many times over the last decade and every time, you come away thinking: “goodness Jim Kirkpatrick is a fabulous”.

This record, though, “Ballad Of A Prodigal Son” is more akin to his work with Chris Bevington Organisation, the blues collective that he has helped propel in recent years.

And it’s appreciably “rockier” (I am not sure that’s a word) than that other solo outing.  From the second that the title track starts things off, that much is obvious, but perhaps a reflection of Kirkpatrick’s personality but he is content to make this a band thing. Jem Davis’ keys are just as important to the funky sound as any of his guitar – both are sublime in fairness.

“No Such Thing As A Sure Thing (written with Overland) is built around a harmonica riff from Paul Westwell, a strutting, glorious piece of fun, it’s the sort of thing that Alan Nimmo and King King do so well, and “Ain’t Going Down Alone” is very much cut from the same cloth.

This doesn’t always want to be the bluesiest thing on Planet Rock, though, and the simply gorgeous instrumental, “Blue Heron Boulevard” has all the sun kissed charm of The Allman Brothers.

And its catchier than you might imagine too. “Be Hard With It” grooves, not too far away from what Bonamassa would do, and if “Skin And Bone” is a touch darker, more primal, then I still defy you not to sing it after two listens.

“Always On The Road” is drenched in horns, a bit like Southside Johnny and is the best thing here, even before you see it is co-written by B. Marsden. This makes Jim cooler than you. Or me, or anyone – and you’d best believe there’s more of that to come.

“61 And 49” is more classic blues. The harmonies from CBO Sarah Miller (Bevington himself plays bass) makes this. Giving it a Stones-ish feel in places, and if I’ve not really focussed too much on the guitar work (the quality of the songs more or less demands it) then we’ll have to give JK his due for his incredible display on the gorgeous “Talk To Me”. A ballad from the top draw, his solo is to match.

The cover he chooses is interesting. “Gravy Train” isn’t necessarily the Status Quo song I’d have picked that he’d do, but whatever, he owns it here, and John “Rhino” Edwards does a shift, see I told you he could sort a guest spot.

“Brave New World” takes things down a notch, but builds with a real mastery, and a record that has generally sounded content throughout ends as calm as a bloke in a hammock with no work tomorrow. “All You Need Is What You Have”, is a mighty summation of this too. A little like that Walter Trout record of a year or two back “We’re All In This Together” it feels like this was real fun to make, as each of the guests adds just a little something.

I don’t say this flippantly – and I know I’ve mentioned him once – but if Joe Bonamassa had made a record as good as this then he puts another Gold Disc in his loo and buys a few more vintage guitars. When a bloke from Cheshire does the same, it might not have the same worldwide resonance, but that doesn’t make this any less good. “Ballad Of A Prodigal Son” is a little like the day job. Under the radar but overflowing with skill and class.