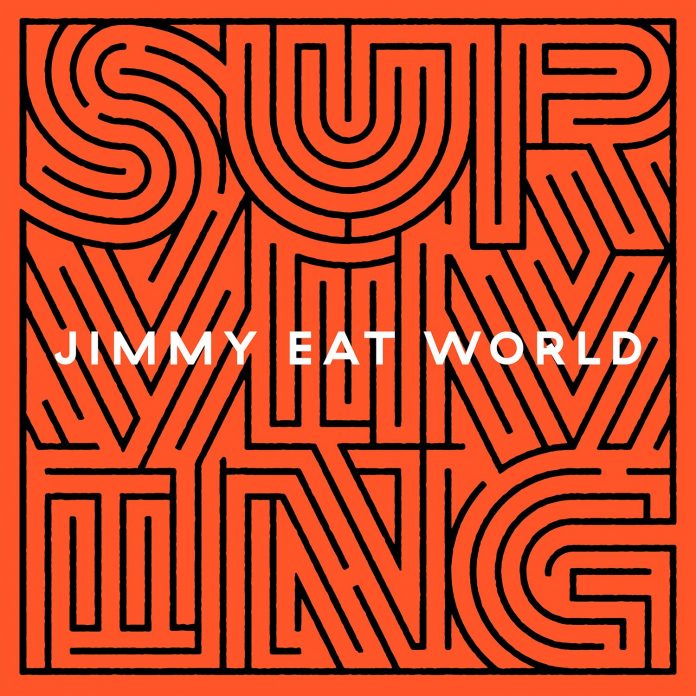 A Black Flag gig is not, necessarily, the sort of place where you’d expect a lot of laughs, but I saw the hardcore legends the other day.

Having a mega-hit must be cool, but if you want to survive, rather than thrive briefly, then you need more – and Jimmy Eat World have always had more.

Jim Adkins knows this. He and the guys have been going about their business, quietly enough, since 1993. Give or take a change of bass player in the last millennium and a couple of touring members here and there this, Jimmy Eat World have been the same four guys, and that chemistry, the bit they make seem effortless, but most probably isn’t is all over album number ten.

“Surviving” is typical Jimmy (both the band and the man) too. Catchy, crunchy stuff that walks some line between pop and punk, comes complete with hooks that you have to admire, but with enough stuff elsewhere to keep it all fresh too.

The title track builds from a big old riff. “Don’t hide your face,” goes its first line. It’s not too far of a stretch, then to suggest that this is Jimmy Eat World proudly being who they are. They follow this up with the absolute knockout “Criminal Energy”. A genuinely brilliant song, and one which you will not forget once you hear it.

The next three are different. I reviewed the recent Goo Goo Dolls record the other week, and “Delivery” would not have been out of place on that. Massive hit is written all over this. “Ending up is not real,” offers Adkins, “the life we build we never stop creating”, and that, when you think about it, is quite profound.

“555” is the most overtly pop thing here. Funky, a little dance orientated, it isn’t too far away from US megastars X-Ambassadors in truth, while “One Mil” has me reaching for the nearest Everclear record. It’s tale of falling in love with someone you see in the street would have had me and at least one of my mates convinced it was about us if we’d heard it in 1995.

“All The Way (Stray)” begins “side two”, if you will, in strident fashion, and shows the influence of this group on modern bands like PkewX3, and the saxophone at the end is a fabulous touch and will have the Springsteen fans amongst us grinning.

Whether a blessing or a curse, I am not sure, but bands like Jimmy Eat World always remind me of the late 1990s, early 2000’s where I was in a serious Counting Crows, Live and Gin Blossoms phase. “Diamond” does nothing to alter that, while “Love Never” is an almost power pop thing. Whatever, it is a real masterclass.

The band have a way of making things thought provoking. “Recommit” is elevated from the usual balladry by just that, while on an album, of short, sharp, three minute-ish rock songs, “Congratulations” sticks out, simply by being totally different. Long, labyrinthian, and thoroughly compelling, it is the mark of a band that is not confined by its past or constrained by its future.

And that seems fair enough here too. Those survival instincts are all present and correct.