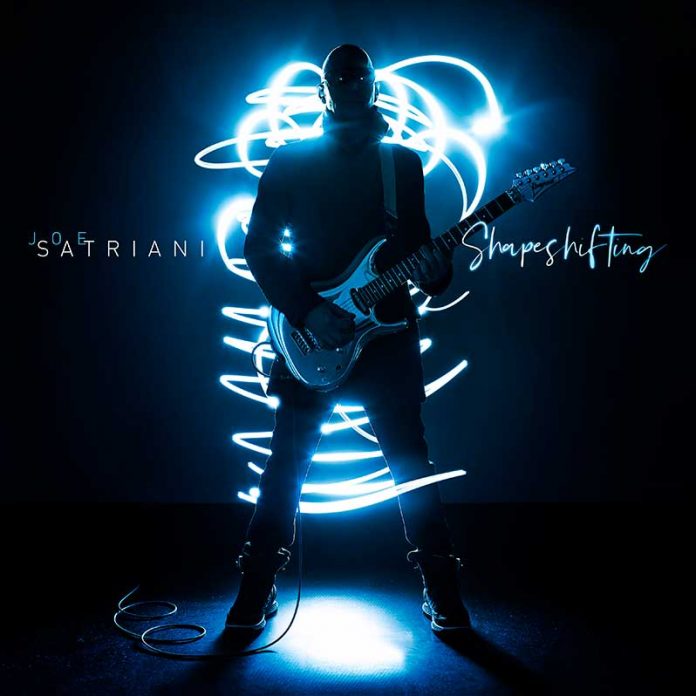 I was listening to a Podcast the other day, with Kris Barras talking about his career.

No mean guitarist himself, Barras got to the subject of those he admired, and he said something that kept running through my mind listening to “Shapeshifting”.

“I listened to Malmsteen, Vai, Satriani, all those guys and they were doing things that I couldn’t even hope to emulate,” he explained.

And he’s right, so how then, does a non-musician ever have a chance to explain away these 13 songs? Joe Satriani is a genius. Simple as that, and someone like me, who has never so much as played a note…how do we articulate that genius?

Well, when it comes to JS, it’s easier than it might appear, because for all the razzle-dazzle, the pyrotechnics, the incredible ability, he always remembers one thing: this is fun. For him, yes, but also for the listener.

In a similar way to the wonderful Paul Gilbert record last year, “Shapeshifting” as a collection, feels like a collaboration. It feels inclusive. This is shown perhaps by the drums of long time cohort Kenny Aronoff – and not the guitar – being the first thing you hear on the album. The title track is built around its drums, before the guitar icing is lavishly added, of course.

Everywhere you look, there’s just a carefree, happy vibe. “Big Distortion” one of the pieces he released prior to the album, is full of glam rock style handclaps, but every time you listen to Satriani, or see him live, I am always staggered by the amount of emotions it evokes.

“All The Love” is a much more widescreen affair, windswept, bluesy and mournful. Close your eyes as I did while listening to it, it conjured rugged rocks. It’ll do different for you no doubt, that’s the beauty.

Eric Caudieux’s keyboards add an electro pulse to “Ali Farka, Dick Dale, An Alien And Me” and the sound of the guitar recalls – to me anyway – that of Billy Gibbons on the seminal ZZ Top track “Gotsta Get Paid”. “Teardrops” on the other hand, one of the few that gives its secrets away with its title, is much slower and almost eerie.

“Perfect Dust” is a prime example of what I was talking about with a sense of fun. A real playful boogie, you can almost see everyone in the studio with huge grins. There is nothing cold and clinical here, this is warm and welcoming.

The man himself has spoken about his love for Eddie Van Halen, and the wonderful highlight that is “Nineteen Eighty” has that type of vibe all over it. And the bass too, from Jane’s Addiction’s Chris Chaney, makes this downright funky in places.

In the making of the record, Satch said he used a particular type of effect to give the sound that 80s feel. Without knowing the top of a pedal from the bottom, I can say that there’s a big old 80s power chord on “All My Friends Are Here” that wouldn’t have been out of place in one of those “Rock The Nation” cassettes you always used to get growing up at Christmas time.

Everywhere you look, though, there’s something that sounds familiar and just glorious. Many hard rock bands would kill for the music of “Spirits, Ghosts And Outlaws”, and “Falling Stars”, which adds a real soul filled thing, is much sparser, and probably passes for a ballad, while “Waiting”  gathers itself around a beautiful piano sound and children giggling in the breeze. It is simply beautiful.

“Here The Blue River” continues the laid back feel, but does so with a bit of a reggae flavour, but it’s the sweet vibe of “Yesterday’s Yesterday” which end this so perfectly, with its whistles and front porch picking style. Similar, really to the wonderful “Tears From A Glass Eye” (the track JS played on Phil Campbell’s solo record last year) before it builds.

I love words, as I have always said on the reviews I do on here, and yet, there’d be no need for words on anything on “Shapeshifting”. It isn’t that they “speak for themselves” or anything so glib. Rather that you can just lose yourself in these 13 songs (note the word, these are not pieces of music). Just let them transport you where you want them to take you.

And that, right there, is why you don’t need a degree in music to “get” Joe Satriani. The shapes he makes are universal.