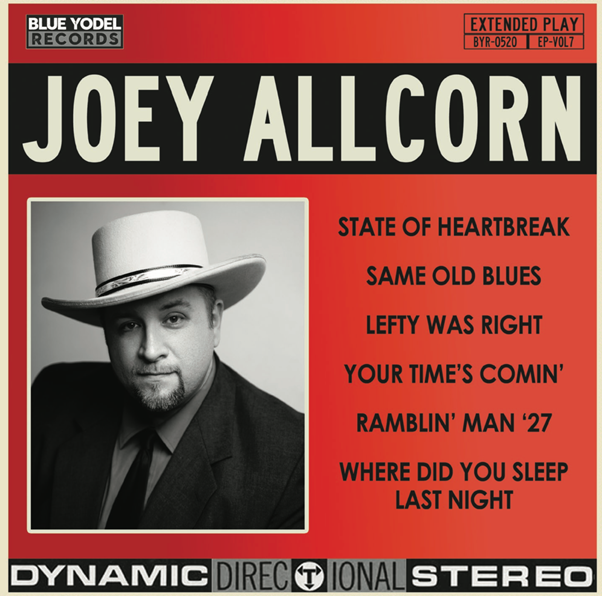 Back in 2006, Joey Allcorn released his debut record. “50 Years Too Late” it was called. He has a point.

His Wikipedia page describes his style as “neotraditional country”. That’s cool too, but it’s a bit too academic for my tastes. This is about a feeling. None of this “neo” nonsense.

I always say that the first country record I bought, the one that opened me up to country and western, if you like, was a compilation called “Elvis Country” that I bought when I was busy collecting everything The King did in the early 90s in my late teens.

Listening to “A Sense Of Heartbreak” though, and I am not sure that is right.

See, here I have regressed to my Gran’s council house in the 80s, listening to the local radio request show on a Sunday morning, while pouring over the league tables with my Grandad, trying to convince ourselves that “with a late run we can make the play off’s, Grandad can’t we?”.

On this show, there was always loads of old time country, Jim Reeves, Hank Williams, and loads more. It was superb. The sort of thing you couldn’t help but love.

The sort of thing I hadn’t really heard for years until this arrived, frankly.

These crowd-funded tunes, four originals and two covers. Are faithful recreations of the traditional “Bakersfield” sound, and yet more, so much more.

If these had been found in some dusty basement, you wouldn’t have been surprised, but to have the likes of the title track as a new song is truly phenomenal. The musicianship here is perfect. Eddie Dunlap’s Lap Steel and Hank Singer’s Fiddle are so, so good.

And the words too, somehow they tap into that feeling of lost innocent times. “Same Ol’ Blues” is catchy, but entirely in keeping with the early 50s feel, like he’s just been dumped at the drive in cinema or something.

“Lefty Was Right” sounds as mournful as can be, while “Ramblin’ Man” is three minutes of perfection – surely it wasn’t written in 2020? Except it was, and somewhere Jason Ringenberg is looking on with pride that someone else is doing this with so much love and authenticity.

The two covers are equally good. “Your Time’s Coming” (co-written by Kris Kristofferson and made famous by Faron Young) is a honky-tonk romp, and “Where Did You Sleep Last Night?” might not have the raw emotion it does when Nirvana covered it, but its dark blues prove that the boy Leadbelly wrote a classic here – not to mention that in the context of this record the guitars of Sol Philcox and Larry Jones take it somewhere else entirely, while still keeping the feel of the EP as it should be.

50 years too late? Make that 60 these days, I suppose, but “State Of Heartbreak” is truly both lovely and wonderful. My gran would have loved this too, so thanks, Joey.