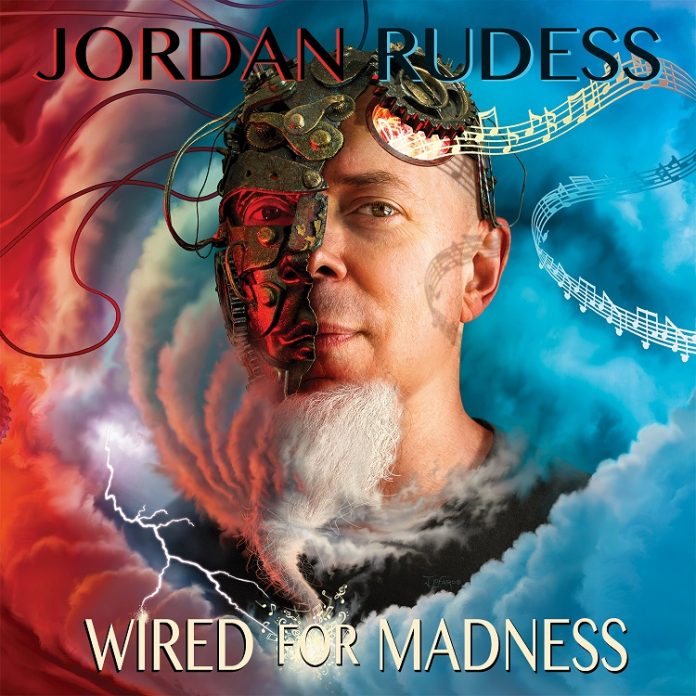 There’s a bit at the end of “Wired For Madness Part II“ – the second part of the title track here that clocks in at over half an hour – that rather neatly slams the nail on the head. “I am a human kaleidoscope, pushing the envelope” sings the character at its centre – who is according, to Jordan Rudess, a “guy who wanted to go about a transformational process involving becoming partially computerized and robotic. His functionality as a human was noticeably diminishing and he takes advantage of a modern medical procedure to “upgrade ‘and extend his physical and mental capabilities.”

Now, forgive me, Father, for I have sinned…..It’s been about a week since my last confession. Today, in front of everyone I would like to admit something.

Here goes: Reviewing prog albums scares the living crap out of me. There, I feel better now.

The problem, you see, is this: prog fans know prog and they understand it on a level I can’t compete with. They know every note, they stroke their chin at every nuance, they know about 14 alternate versions of each and every song.

Then there’s the other issue. To be honest, I am a bit of a philistine. When bands try and explain the story behind the music I turn into a cross between Beavis And Butthead and Homer Simpson. I glaze over and go, “ok mate, now play this song and I’ll decide if I like it or not, yeah?”

Usually prog albums have a massive concept behind them too. “Wired For Madness” is a classic case. In interviews that I’ve printed on here, Jordan Rudess is at pains to tell you it isn’t a concept record, then spends two paragraphs telling you the narrative.

My notes for the two opening songs were rather less prosaic, but might explain how involved the tracks are. “Journey. Harsh keyboards. Metal. Big band. Prog overture. Space? Out of body. Electro. Rave. Massive metal riff. Kids tv show. Half way through female vocalists.”

Look, what that means in practice is that this is an involved thing that manages to include just about everything in its midst. It is a quite stunning piece – as heavy as thrash one minute and as electro as Aphex Twin the next. And yet somehow it is compelling and thoroughly enjoyable.

I’ve seen Rudess in Dream Theater enough to know that when he plays his solo in their set he is a) utterly magnificent and b) a frustrated rock star – and maybe there’s an element of that here, given how much this crams into the remaining six songs too.

“Off The Ground” is perhaps the most like DT. A gorgeous, big ballad, but it has a sense of the huge, some wonderment about it. It can’t resist asking the big questions either. A bit like a Theater song, it casually drops the bombshell of “where do we go? Nobody knows all the answers.” Over a beautiful soundscape, and its passed into the ether long before you realise it has questioned the meaning of life.

If the interesting, almost robotic sounds of “Drop Twist” and the funky “Perpetual Shine” are more like what you might have expected from “…Madness”, then the glorious blues of “Just Can’t Win” is the work of a man who loves playing with the rules. Joe Bonamassa guests here, and brings the big band sound he did on his “Live In New York” record to boot.

The record floats by almost, “Just For Today” which is proof, if it were still needed, that this could have gone off in any direction and been anything Rudess wanted it to be, while the almost frantic sounding “Why I Dream” is yet another perfectly judged turn on a record full of them.

It seems almost redundant to say there is technical excellence of rare ability here, but mere mortals can be aghast at this (just listen to the jazzv flavours in the last track…..good God!) As a kid I loved playing the keyboard, and although I was terrible, I wrote my own songs and thought I was cool when I played them.

Here’s a man who is really is cool. And he’s a fabulous songwriter too. I might not “get” it in the way that some do. What I am sure of, however, is this: “Wired For Madness” is brilliant, whatever level you engage with it on.