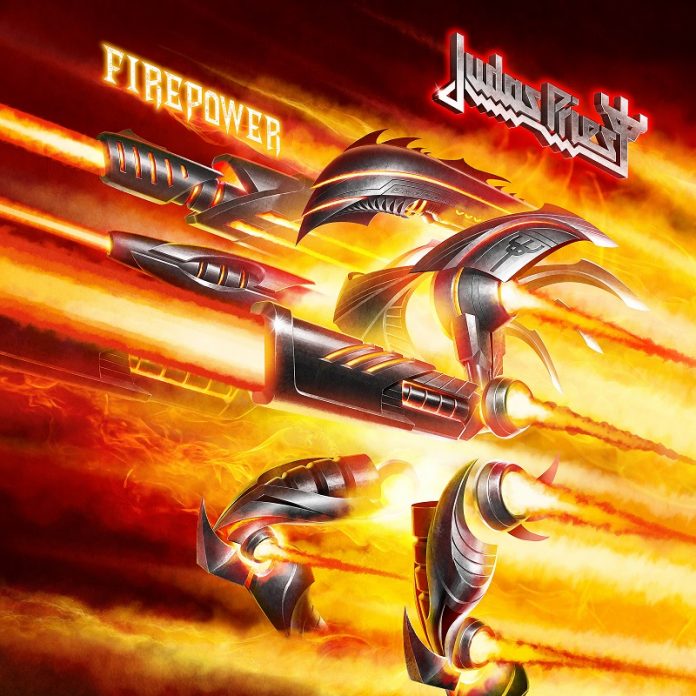 Firing on all cylinders

It actually takes 12 seconds for Firepower to bare arms and make its first shot bang on target, because contained in those 12 seconds there is a chugging metal riff before Rob Halford (surely along with Ozzy and Bruce Dickinson the absolute embodiment of metal singers?) has let out a scream. It’s a scream that offers so much more than just another opening, it’s a scream that is an announcement. An announcement that rings out clear and resolute. It says four words.

It says: Judas Priest Are Back.

Whatever the trials and tribulations since 2014’s “Redeemer Of Souls” – Glen Tipton’s illness reducing his touring contribution is merely the latest – then this could only be Judas Priest, many bands try to sound like them (more or less every power metal band from Germany for a kick off) but no one does. They are truly unique.

“Firepower” is mostly very much a classic sounding Priest record too. It doesn’t bother much with experimentation, it is much more interested in sounding like the most vicious heavy metal record it can be. KK Downing might not be here (and for some I guess that means it isn’t really Priest) but the soloing here from Tipton and Downing’s replacement Richie Faulkner is of the slashing variety (the two guitarists along with Rob Halford write all the 14 tracks here) and Faulkner is a revelation.

There is a modern tone to it as well, and if you are looking for the obvious signpost, then look no further than the producers of it. Long-time cohort Tom Allom is joined by Andy Sneap this time, and for all that it sees them reclaim their crown as Metal Gods, “Firepower” comes in with a modern crunch and violent punch when it needs.

Not least on “Lightning Strike” – the first single from it. “I’ll bring you the head of the demon,” sneers Halford on its first line. “Peeling the skin from his face”. The subtext is clear. Do not mess with anyone here.

It’s interesting that you listen to the tracks here, like the mid-paced and catchy as you like “Evil Never Dies” and you think “ooh that bit sounds like Metallica” before pausing to consider that it’s the other way around, most probably and Lars’ boys worship at this altar too.

Even forgetting the fact that JP deserve reverence and adulation, then “Firepower” is a quite fabulous heavy metal record, it’s absolute best thing is probably “Never The Heroes” which walks the planet like some huge beast, building around a keyboard riff, before becoming a fists in the air classic. Although in truth there is so much to commend it. “Necromancer” has a real evil sounding thrash side, and the wonderfully overblown “Children Of The Sun” has a bit of a Sabbath thing about it.

The instrumental “Guardians” is a palette cleanser, and one which perhaps heralds a slight change in feel. If the first half was mostly about fast, hell bent for leather (if you will) metal, then the second half is a little bit more epic.

Not that it is any less entertaining, though. In fact, “Rising From Ruins” shows all those power metal bands just how to do it, while “Flame Thrower”  both crushes, and manages to soar for the skies at the same time, and “Spectre” has an Eastern flavour and is essentially a study in the awesome power of the riff.

“Traitors Gate” opens like it is a latter day Maiden song, but soon sees Raven’s flying everywhere (there’s always a raven in proper metal) and it is difficult to see “No Surrender” as anything other than a hymn to themselves and the idea that metal will never die. All that’s missing here is pyro in the studio.

Just for fun, it seems, they’ve chucked in a couple of curveballs before the end. “Lone Wolf” is all downtuned and it wouldn’t be unrealistic to think it might be Orange Goblin or something, before the acoustics that drive the closing “Sea Of Red” act as a timely reminder that whatever else Priest are – and if you drew the identikit metal band then it would look something like them even now – they are too clever to have it all about bombast.

“Firepower” is not just a magnificent album, it is a magnificent Judas Priest album. Don’t doubt them, don’t write their obituary, because, on this evidence, Metal Gods never die.