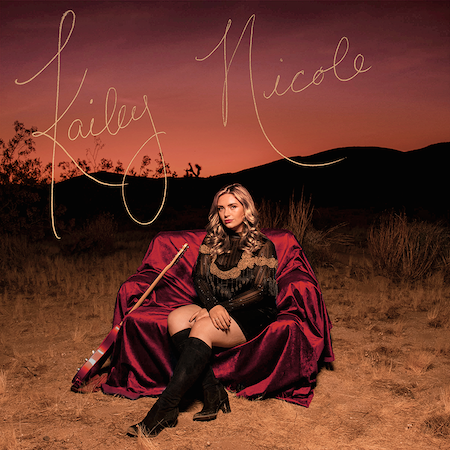 Like I’ve always said, if I’d come home from school one day and explained to my mother: “Mum, me and my brother have written a hit single and we’re going to tour it.” She would have probably responded: “That’s nice love, have you got any homework?”

In Tulsa, Oklahoma, the Hanson family, though (admittedly, they were faced with a mega hit in “Mmmbop” I suppose) go: “yeah brilliant, your dad will manage the band.”

They do things differently over there. Probably.

Kailey Nicole is one of those uniquely American stories that people like me, living in the UK think litter the whole of the continent.

A chid performer, since she was nine years old, she was weened it seems on the work of Connie Frances by her Connie soundalike grandmother.

She then released her first EP when she was 16 and took time off to study music at the University of Southern California.

Which, pretty much brings you up to date with the lay of the land prior to the self-titled EP number two.

Except to say this. Nicole is fabulous at it and has a gorgeous voice and between her and her writers, has a fine ear for a song with hit potential.

“Brand New Day” has as much an eye on the pop charts as it does the Grand Ole Opry, but that’s just fine, given that she’s a young woman in the 21st century, but Nicole is an artist with a keen interest in the past. Those Connie Frances songs of her Grandmother come to the fore on “Diamonds And Coal”, which dares someone to dump her, and you best believe they aren’t getting her back.

That one was originally written for Kenny Chesney, but she owns it here, and if “Save Me For A Rainy Day” is slower, a little more regretful, it is done with a glint that suggests that she will belong to no one,  deep down.

There is a real polish, a class about all six of these. Mastered and engineered by a team that have worked with Madonna, and stardust is sprinkled all over “Change My Ways” – which has gold disc written all over it – and the urgent sounding “Tennessee”.

“Country Love Song” is one of the first songs Nicole ever wrote (at just 15) but it is done with such a maturity and delivered with such a talent that it is scarcely believable.

The lines of country are increasingly blurred. Is it the country of Dolly and Tammy, is it Waylon? Or is it the new breed, like Eric Church, Brothers Osborne or Brantley Gilbert? Who knows? What is certain, though, is that Kailley Nicole will let others decide where she fits in. She’ll just make superb crossover country pop. It is entirely possible that a star is born here.