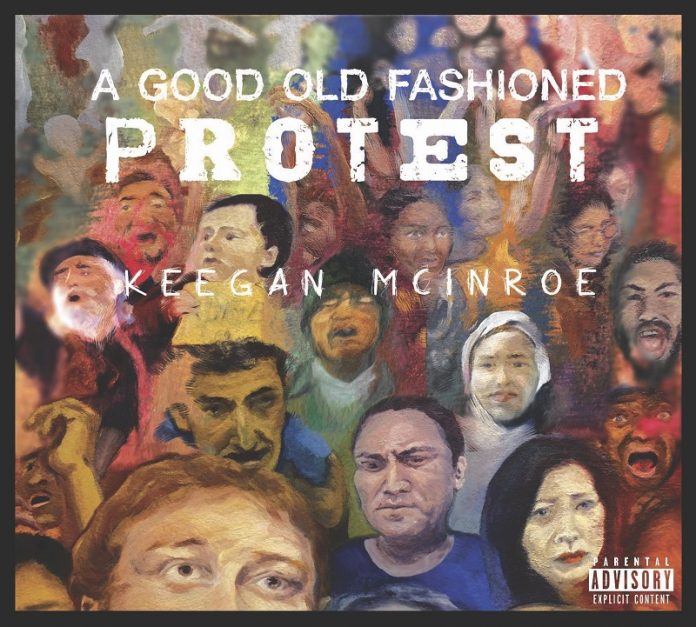 The record that should be the voice of 2018 is right here.

Often at MV towers we get death metal albums to review. The good thing about Death Metal is that there’s never any doubt. Call a band Gore Rot or something and you kinda know what you’re going to get. There are no nasty surprises. The band does what it absolutely said it was going to do.

Similarly, back in the 1990’s the wonderful comedian Billy Connolly did a routine where he said the best word to use in the English language was “fuck”. He suggested, not unreasonably, that you never read in a book “fuck off, he hinted”.

The point of all this preamble is to say this: Texas singer-songwriter Keegan McInroe has come up with nine songs, that he sums up in his own words thus: “This is a protest against war. It is also a protest against and comment on a number of other ills. It is a protest for unity, compassion, reason, action, and love. I lend my voice to the chorus of voices around the world calling for a peaceful, humane, respectful, enlightened tomorrow. “

In short, a good old-fashioned protest.

It is a short and sharp boot to the balls too. Nine songs and less than half an hour. But protest doesn’t need to filibuster. There is too much to put right.

“Talking Talking Head Blues” is a wonderfully strident opener. The type of track that Dan Bern used to make, it is talking blues in the great tradition, a genuinely funny excoriation of the right-wing media, before moving to attack celebrity culture, it is enough to show categorically that McInroe is a brilliant songwriter.

“Big Old River” is dust bowl folk, recalling everyone from Woody Guthrie onwards, and if largely this record is just McInroe and his guitar then the percussion here is well-picked out.

“Bombing For Peace” is a stark warning of the stupidity and futility of war, while “Christmas 1914” continues that thought and – literally  – makes it about flesh and bone. Written from the perspective of an allied fighter who has taken part in the famous football game between the two sides, it ends with the thought: “I just met some boys they want me to kill….”

The fact this record is so on the money is never better shown than on “Bastards And Bitches” which takes precisely 62 seconds to take anyone in power to task, and the fact it takes perspectives that many wouldn’t even think of is reflected perfectly on “Timmy Johnson’s Living Brother”. Narrated by a kid who lost his family in a bombing raid and becomes radicalised as a result. There is a line here which sums the whole record up. The chorus refrain “what a catastrophe, can you imagine a world where this is viewed as ordinary?”

“Nietzsche Wore Boots” is a quite astonishing three-minute poem, and the record ends on a more upbeat note as if to show that all hope is not lost. “The Love That We Give” looks for the light at the end of the tunnel, and “Keegan’s Beautiful Dream” (which had been referenced in the opening line of the opening song) concludes the collection by suggesting it is only the people who can change the path we’re on. “And we are the instruments / Set to be played / That’ll move us from darkness /Out into the day.” And it’s hard to argue.

If that doesn’t sound like your bag for whatever reason, then shuffle along. If on the other hand, you still think music should reflect its world, even if it can’t necessarily change it, then you’ve just found your champion.

Back in the late 90s Billy Bragg released a collection of his B-sides. He called it “Reaching To The Converted”. This is – perhaps – the 21st century equivalent. It is, though, quite wonderful.