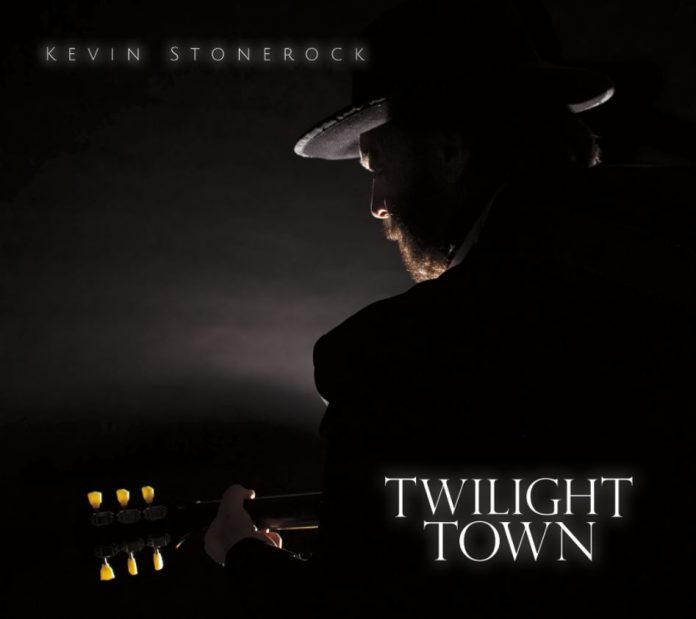 Getting these releases from people you aren’t aware of is brilliant. The best thing about doing this website actually. As I wrote on one a couple of weeks back, if you are really lucky they give you documents to help you with facts and stuff, so you can look like you are well informed.

Kevin Stonerock was even more helpful than that. He had two biographies. The first one was good. It had stuff like this on that most reviewers would have used to appear like they had all the records, if they rewrote some of the text, like this.

“Kevin Stonerock released his first album in 1978, Since then he has been actor and storyteller, performing one man historical shows over 4000 times. He has also found the time to release four albums.”

Then there was a longer one that contained the greatest phrase in the history of these things: “A blood relative of “Davy” Crockett (they share common grandparents), he apparently inherited his famous cousin’s penchant for storytelling and love of solitude; conflicting notions which on one hand require being alone and the other an audience.”

Right, I’d best up my game here. There’s no way I can top that, is there?

None of that first 200 words were where this was going to start, either (research isn’t usually a strong point of mine, to be fair, it was only because he helpfully sent a lyric sheet that I read the rest of it). No, sir. It was going to start with the email that Kevin sent me: “I found your site while perusing some reviews on my friend Jason Ringenberg’s website.” Christ.

Jason Ringenberg is a hero of mine. I’ve written that countless times. Genuinely without Jason And The Scorchers, my musical tastes would have been different, and that also put this line on the wonderful opener here “Too Young To Quit” in an entirely different light:  “I’ve rubbed shoulders with the nearly famous” sings Stonerock here. “And it never got me anywhere at all”.

There’s a real talent in these words. It is a wonderful song. There are occasions when lyrics resonate in ways they shouldn’t, and one of them was this. “Hanging on to things that do not matter. Acting like a sane man in disguise”. It gives a real pause for thought when you actually were just enjoying a sort of Dan Baird type slice of rock n roll in your garden. That’s genuine skill.

“Go Ahead On” makes good on his assertion that he “was Americana before the term was invented” and the guitar solo here, played by Gabriel is perfect, it really is.

The same could be said about much of this. “Railroad Man (Brakeman’s Lament)” is the sort of stuff this type of music was made for – its hard to pick a highlight in a record so consistently good, but this would be close. Interesting too, that I heard the words “old boomer” and assumed it was about one thing, when in reality that is a term used for a type of freelance Railway Man.

“Life Of The Party” sounds like it was made for the honky-tonk (or at least what an Englishman like me imagines to be a honky tonk) and the glam rocker in me read the title “Gypsy Road” and immediately imagined a Cinderella cover. Where this road goes, though, is darker. There is a sense of foreboding here, the fiddle of Shane Guse adds so much to things throughout, but especially here.

Many of the characters here appear to be searching for something, anything, to navigate their way through. The title track seems a real centre-piece for the record, the one that joins it all together, and the second chance on offer is to be taken, it appears.

“Long Slow Fade” is classic 60s sounding country dealing with a relationship that is inexorably coming to an end, it drips with emotion, whether it is personal or not, isn’t made clear, but it will help someone, somewhere.

The working class struggle is laid bare in “I Wish I Was A Riverboat” and a struggle of a different kind – that with your own demons – is shot through the fabulous “Black Diamonds” (they are guitar strings, apparently). What a story it hints at too, but like all the best, it lets you fill in your own blanks.

“That’s The Truth” lets its hair down for some rock n roll. But “the dues ain’t never paid and that’s the truth” seems to capture the hard-working, feet on the ground approach to the whole album. While “The Town Where I Was Born” (sample line: “we lost our school in 64, and never got it back”) is rooted in the heartlands. That American dream that those of who live the USA through the lyrics of our favourite songs understand totally, but don’t understand at all.

The rest of Kevin’s email to me last week simply said this: “I’d really appreciate a listen and, if you like what you hear, a review of my new album, “Twilight Town”.”

From that we can deduce Stonerock doesn’t seem the type to do hyperbole, so I am going to have to. This is one of those albums that you want to shout about from the rooftops. “Twilight Town” deserves its place in the sun. Not king of the wild frontier, like his relative, but a genuine master of this craft for sure.