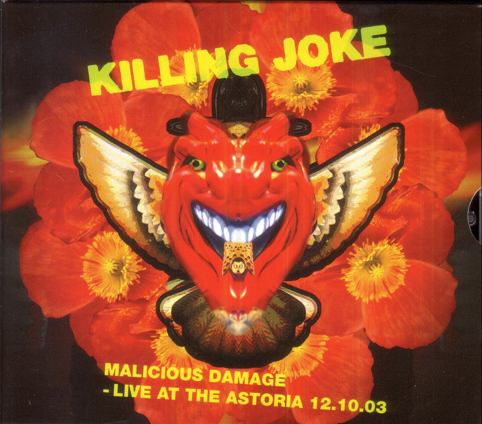 Having first seen Killing Joke in 1980 at the Cedar Club in Birmingham and then seeing then on their recent tour at the Institute nearly four decades later made this a great album to review. Killing Joke have always been a unique proposition with some great musicianship that almost goes unnoticed as their shows are so visual and intense you get totally drawn into the performance.

Killing Joke appeal to punks, goths and rockers alike and explore subjects that your average music punter could find a bit too menacing. ‘When we play our next show some of you will be dead’ Jaz Coleman states on this album, which gives you a feel of how dark they were and still are. Whilst they became closer to the mainstream in the mid 1980s at the time of this live performance they were pretty much back to what they did best, haunting, disrespectful and  anti-establishment.

Paul Raven’s thudding and melodic bass is relentless as are the pounding drums we associate with the industrial-strength rhythm section that is classic Killing Joke. Jaz Coleman’s vocals are both raw and melodic when needs be and guitarist Geordie Walker’s riffs are tight, incisive and inventive. Nik Walker’s dense synth work makes the performance even more sinister.

While for me the original Killing Joke line-up remains the strongest, this line-up was something special, and this release makes you wonder what would have happened had they hit the studio. Sadly we will never know as Raven sadly died a few years after this recording was made, making it even more poignant.

It is easy now to see that KJ influenced so many later groups and genres, from the Cult, New Model Army and Death Metal and the album shows how revolutionary this band was. The intensity of Killing Joke gigs is legendary and their performances are hypnotic, intense and very powerful. ‘Malicious Damage’ is testament to a truly visionary, outstanding band.

Gatherers of the world is released on 6th September, through Killing Joke Records / Cadiz Music. The concert now entitled “Malicious Damage” was filmed and recorded live at the legendary Astoria venue in the heart of London’s Soho on 12th October 2003.  A multi-camera shoot captures the passion and brutal violence of Killing Joke’s performance. Sadly one of the last recorded concerts to feature bass player Paul Raven before his untimely death in 2007.

The concert is released on limited (1000 only) double red vinyl in a gatefold sleeve featuring the artwork of long-time Killing Joke artist / collaborator Mike Coles. On Double CD in slipcase and the DVD in a metal box with 5 postcards, limited to 2000.

Killing Joke Astoria 2003 line up was:

01 The Death And Resurrection Show.