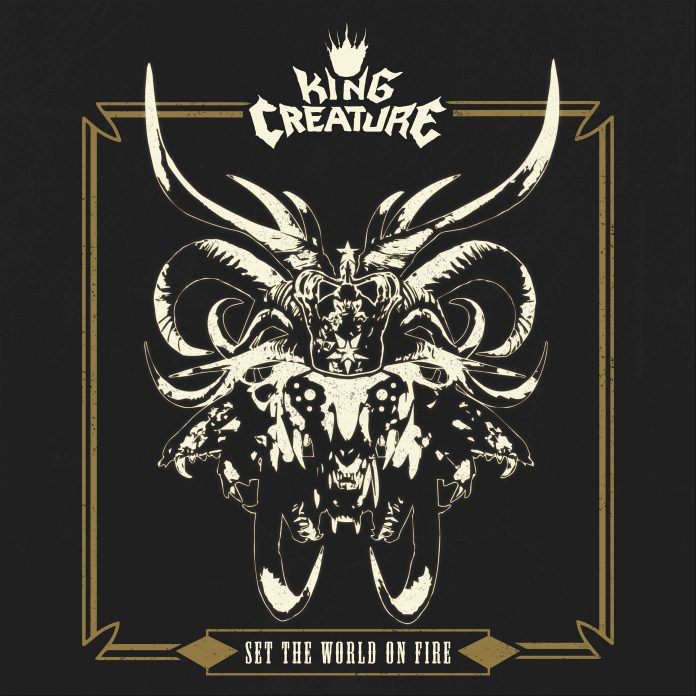 Back in September 2017 I reviewed the debut album from King Creature. I proclaimed them as “Cornwall’s new kings.”

In amongst my usual hyperbole (I am not shy, never have been, lets be honest) I made a couple of points that made a little bit more sense three years on.

They were, I said, [a band that] goes from being CoC infused to soaring arena rock in the blink of an eye”, but that they could do “the loud/quiet thing like it was 1995 all over again.”

There was something in that debut that said KC would reveal themselves more fully in due course. A feeling I had again, seeing them support Phil Campbell about this time last year. They seemed more aggressive, more (for want of a better phrase) sure of themselves.

The results are there for all to hear on “Set The World On Fire”.

It begins with “Desolation.” A track they’d played that night with Campbell. It is big, thick and strident. It is the type of opening to kick down doors, not politely knock.

And, yet it has a melody. A hook. If I say the words, “it doesn’t sound like a UK band” then that’s not a criticism. What I mean is that while others go down a bluesy, retro path, this is almost a fresh kick in the arse for grunge-type flavours.

There is more than a touch of Jerry Cantrell in the guitars of “Captives.” More than a pinch of the early, metal strains of AIC. The thing is, though, that no one here is too interested in a rehash. “Wisdom Told” a song for fathers, and one with real emotion, has a simply brilliant guitar solo, and is balladry for those that want something more than a Hallmark card.

There are some genuinely heavy moments here. Heavier than the debut. “Falling Down Again” is proper metal. Groove metal at that. There also seems to be a real epic intent here. A darkness that seems to naturally permeate. “The Storm” is a prime example of that. It’s not quite Iron Maiden, but neither is it your bog standard hard rock outing, either.

“I Quit” carries the theme on a little. The way the vocals are delivered is interesting. But the whole feel of the album is contained in its chorus: “fuck your apathy,” spits Dave Kellaway like he really, really means it. There’s a lack of inertia here, that’s for sure. This is a statement.

“Demon Within” is a real highlight. Discussing the maelstrom of mental health issues and the confusion, the nightmare is laid bare. Plus, the apocalyptic nature of 2020 is discussed on “No Getting Out Alive” is an anthem for the Covid era (it actually mentions the pandemic in the lyrics) but it dismisses “the hive of our stupidity”, so its raw.

“Beautiful Fatality” is the band at their best. Crunchy, heavy, and with plenty to say, yet wrapped up in a harmony. It takes real skill. They even get the acoustics out on the “Fear Of The Fool”, which builds and broods.

The last one “Live Forever”, even threatens a proper NWOBHM gallop at one point, and underlines the fact that when they go out with Orange Goblin in 2021 (vaccine permitting) they’ll not be found wanting.

That’s for the future, though. For now, “Set The World On Fire” is more than just a hot release. It is the work of a band who already believes they belong, and it is the sound of a band that – if they were American – would already be gracing the cover of the rock magazines.