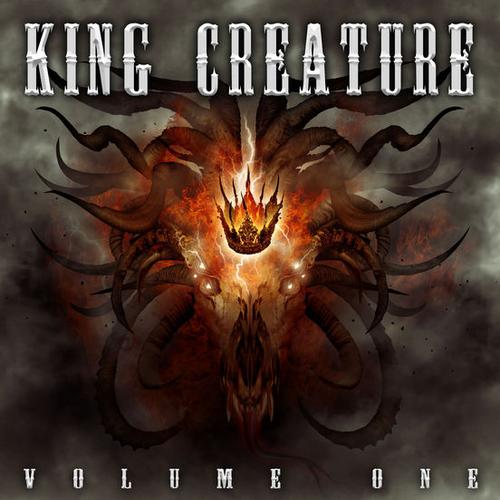 Supporting Motorhead on their last ever gig is some claim to fame. King Creature did just that, which kinda means that if we were playing rock n roll poker, they’ve got a winning hand.

The star dust is liberally sprinkled elsewhere too, as ‘Volume One’ was recorded at Abbey Road Studios with producer Rob Cass (Slash, Brian May, Jack Bruce, Bernie Marsden). Not many bands can boast such a thing on their debut record.

But then, not many debut albums are this polished, assured or downright classy.

Cornwall doesn’t immediately strike you as the hotbed of new roc either, but these boys are out to re-write that particular rulebook. In fairness, though, they are doing so with a sound that is more South West US than South West UK.

Opener “Lowlife” is a decent insight. Muscular and stomping, but with an ear for melody, it is mighty and testosterone fuelled.

The cleverness of this, however, is that KC are more adept than that. Guitarist’s Dave Evans and Matt K Vincent are in fine form throughout and their work, allied to the skill of bass player/singer Dave Kellaway and drummer Jack Sutton – Bassett mean this is always finding new avenues to explore.

“Fortune Teller” goes from being CoC infused to soaring arena rock in the blink of an eye, “Can’t Be Saved” wanders off down a sort of dark, bluesy back alley, while “Dead Inside” has a mighty opening riff before doing the loud/quiet thing like it was 1995 all over again.

“Power” sees Sutton Bassett to the fore, anchoring its footprint, “The Pusher” on the other hand has an almost foreboding air as it begins. Indeed the riff here wouldn’t be out of place on a thrash metal track. That they can follow this up with a mighty arena bothering ballad in the shape of “Can You Forgive Me” says all you need to know about the band.

If what all great rock n roll needs is a cocksure strut, then “Volume One” finds just that with “Money” and this nose for trouble extends to “Everything”. The standout cut here, it is sleazy but hard hitting, and bands spend whole careers looking for a hook this catchy. King Creature manage it on their first foray.

The album ends in many ways by going full circle. “Wrath” has an eye on something stateside and isn’t bothered about hiding its intentions either and there is a certain glee about the way it switches gear in the final solo.

Dirty enough to be a biker rock band like the Almighty, there is a feeling that the four piece are just getting started here.

Lemmy always could pick a support band. Here’s the proof yet again. King Creature have enough talent to do whatever they choose.