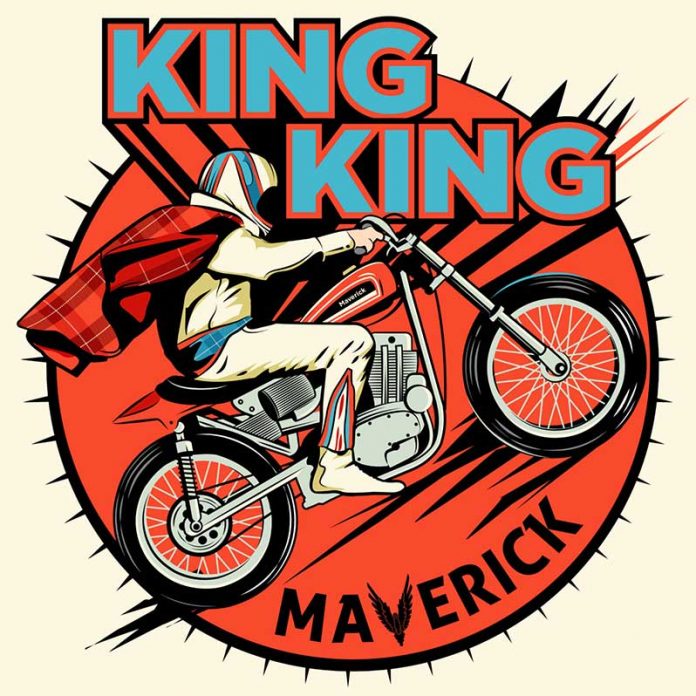 Back in the summer King King released a single called “Never Give In”. It’s the first track on “Maverick” as it happens. KK front man Alan Nimmo gave an interview at the time that I printed on the site. One line of it kept sticking out: “I wanted to have a big sound with plenty of space,” he’d said. “A classic rock song that still said, “King King”.

That last bit, “a classic rock song that still said King King”, it seems to complete the journey that the band have always been on. Maybe that’s where the “Maverick” name comes from? It’s always been a hypothesis of mine that for all the Blues awards the band got and will continue to get, they were essentially “just” – heavy inverted commas – a rock band.

I’ve never met Alan Nimmo (I interviewed him once by email) but me and him are similar ages, and I’d wager have similar musical tastes (and if he had the model of Evil Kinevil that adorns the cover then so did I). The band often arrive on stage to AC/DC, and I sat three seats away from Nimmo and his big brother Stevie once at a Thunder gig. They both knew every single word (I’ll grant you that King King had just opened so that’s where the similarities end…..).

The point is, “Maverick” is less bold when it all seems so natural.

So the opener, then. Big, swaggering, brilliant guitar, catchy as hell. So very King King, Except this is a different band – literally. New drummer, new keyboard player, new bassist and Stevie in full time (albeit he only sings backing vocals on these).

And in many ways that keyboard player, Jonny Dyke, has taken on the most central role it seems to me. Co-producer, arranger and co-writer, but his sound is all there in the mix, right to the fore.

The word “mature” and rock n roll, always makes me worry. It’s usually a by-word for boring, anodyne and safe. So when people kept talking about an added “maturity” to this album, there’s a concern. Except all it means here is they let themselves go anywhere they wanted. “Fire In My Soul” is a proper, rollicking 80s AOR thing. I kind of like the idea that the Nimmo Brothers were watching Fame on the TV in the early 80s and have loved the mix ever since. That might have been me and my brother, but still, this has more to do with Radio 2 than Planet Rock.

There’s something relaxed and reflective about this throughout. “Whatever It Takes To Survive” has the massive King King ballad thing going on. The organ is perfect too. “I Will Not Fall” – the first single with which they ushered this new dawn in – has a real funk feel. Oozing cool, it is yet another example that this is a record with no walls whatsoever.

“By Your Side” is proper power ballad, I am telling you, Alan Nimmo got the same Heart records as me, growing up. And Dyke, yet again, proves his worth. His different style to the former keysman Bob Fridzema is so noticeable.

“One World” is a simple plea for unity. It’ll sound great live, if we ever get back to seeing them live and there’s a genuinely lovely, airy and warm feel about the work here. “Everything Will Be Alright” is just a pleasant song, offering light at the end of whatever tunnel.

“When My Winter Comes” is the type of statement track that you can see becoming part of their set for years. It might actually be the best thing here, simply because it is so pure. You keep expecting it to cut loose, add a big old screeching solo. It never does.

“Dance Together” is a celebration. Of life, of rock n roll, of friendship, and if “End Of The Line” has the most “blues” feel of all, then the line, “here we are together, so many years apart, and I don’t know where we’re going, but I sure know where we are”, well you can read it any how you like, but I’ll go for this: rather like everyone knows Springsteen’s “Bobby Jean” is about Little Steven, then this is about the band.

This is an interesting record as well as an exceedingly good one. The purists might baulk at it in truth, as it is further away than ever from “the blues”. That’s the thing, though. Purists generally hold back progress – and maybe a true “Maverick” knows that and goes their own way come whatever may.