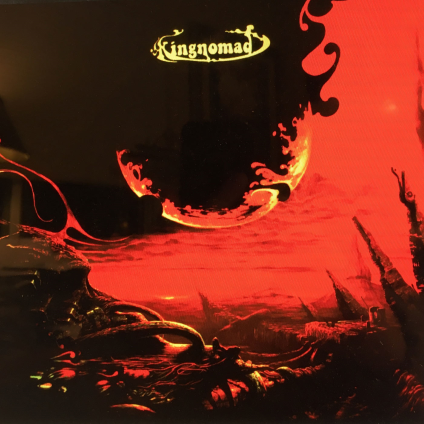 Bernard runs the rule over the latest from the Swede doomsters

If you’re the type of person whose day isn’t complete without some Swedish Psychedelic Doom, then Kingnomad are just what you’re looking for.

Formed in 2014 on an endless diet of Sabbath riffs and beer, the first song they wrote was ‘Lucifer’s Dream’, which set the template for the Band’s direction and fittingly opens this album. It’s a great song which will instantly appeal to Uncle Acid fans and also, with its melody and vocals, may well appeal to some of Ghost’s more hard-core followers. ‘Nameless Cult’ follows which riffs away like its predecessor but is more uptempo. ‘Whispers From R’yleh’ is a strange track with it’s gentle strumming and breathless female vocal, before the mother of all riffs kicks in shortly before the song ends. ‘The Witches Garden’ is easy on the ear and has a real 70’s bluesy feel to the guitar work. ‘The Green Meadow Part 1 & 2’ is a much heavier affair, with an obvious Sabbath influence. At 7 minutes long it’s the album’s showpiece track and the one I’d like to hear live. ‘The Wizard’ has a Gothic keyboard start which kicks into a riff driven number that is very commercial and not that far removed from the afore mentioned Ghost – it’s my favourite track by far. ’The Waiting Game’ closes the album and at 8 minutes, it’s another song where the Band stretch out musically but despite the length of the song, it never outstays its welcome.

Overall it’s an album that of great promise which remains original throughout, whilst giving flashes of their influences and inspiration.