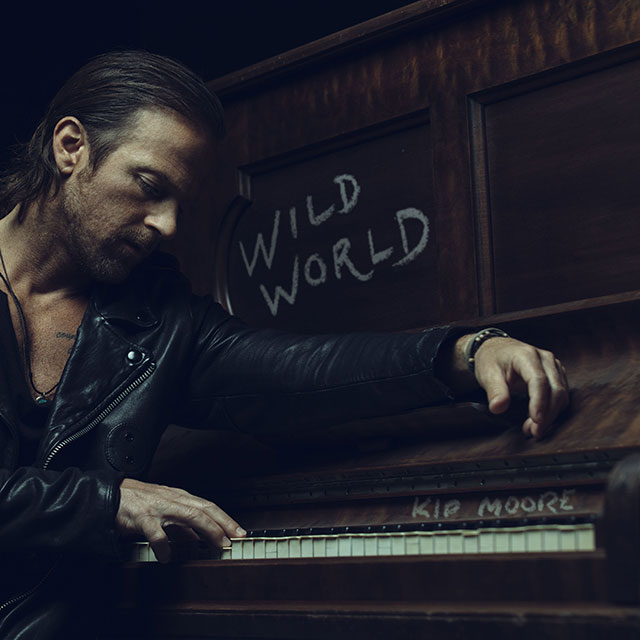 I don’t usually start these reviews in the middle of the record. However, in the case of “Wild World” it seems like the only thing to do.

See, track five of the 13 here is called “Red, White Blue Jean American Dream”. It’s a cracker too, actually, but it stands out for two reasons. First, it is noticeable that it is the only one that Kip Moore hasn’t had a hand in writing, but second, a red, and blue jean American Dream is what this music sells us all.

I have spent, precisely six days in America in my life  – I was the Best Man when my oldest friend got married. He got married in Las Vegas, and we have been friends for almost 40 years, partly because of the music we both loved. Part of my wedding present to him and his wife? Tickets to see Cinderella, Firehouse, Ratt and Quiet Riot in the Hard Rock Café. The next night we saw The Wallflowers at the House Of Blues. 15 years later they are still married, so its all good. B

The point though, is to me, and millions of others, “our America” if you will is not the America of those awful race riots, the worse President and the record unemployment. To us, it’s the USA of songs. I always knew from 1982 that I loved it loud, as it were. Whether they are the glam rock vibes of when we were youth gone wild, the widescreen ideals of tramps like us being born to run, or the small town stories of our little Hoodrat friends (that’s a Hold Steady reference for y’all). Six days in the US? Nah, mate. I’ve been here all my life.

Which is why artists like Kip Moore matter more than you think.

He’s a similar age to me – I am slightly older – and he’s a serious deal in his homeland. His previous three records have sold big. Top ten on the Billboard Charts big, and world domination is on the cards with this.

Everything about “…World” screams massive hits. Right from the opener “Janie Blu”, which is essentially a vehicle for his wonderful voice and laid back acoustic blues, to the rest, this is made to resonate.

The teams of people who wrote these tunes are matched by the skill with which they are  played. “Southpaw” has a chorus that is a gold record as sure as night follows day, and if he shares a UK label with Brothers Osborne, then the sound isn’t too far behind.

But, rather like the Brothers, say, country is only the roots, just the starting point. “Fire And Flame” is stadium shaking in the U2 ballpark (the good U2 of the Joshua Tree), the title track is overt pop music of the sort that Chase Rice would be proud, and  the tongue in cheek “She’s Mine” isn’t a million miles from something Bruce Springsteen would have tackled somewhere between “Human Touch” and “Tunnel Of Love”.

All these references are one thing, of course, except that Moore has the skill to pull this off. The chops to make this world his own, like “Hey Old Lover” – the sort of thing that makes a booty call sounds wholesome – or the downright southern funk of “Grow On You”. This is glorious, frankly, and if you like Cadillac Three then get to this one immediately, don’t pass go and just listen to your new favourite.

There are – genuinely – no weak points here. Even the more sentimental working class, blue collar thoughts of “More Than Enough” (“if Uncle Sam goes and steals my money, I am good with a spoonful of your sweet honey”) would usually stick in the throat a bit, but oddly not here. This is for the dreamers, for the kids who won’t get a prom this year because of Covid-19, this is a love song, and not everyone is has un-sentimental as me.

There’s some laid back southern sunshine, and lovely lap-steel on “Sweet Virginia” and “The South” is basically the best Eric Church song that Eric never wrote. Every single thing on this album sounds like its primed it ready, but oddly it doesn’t sound particularly polished either. Rough around the edges, even the acoustic balladry of “Crazy For You Tonight” has just a hint of danger, of being on the wrong side of the tracks about it.

The last one “Payin’ Hard” perhaps is a look back to the soul of the songwriter. He spent eight years in Nashville before his big break came, and the lyrics here deal with the guilt of not seeing a dying parent, and it also admits: “I chose this guitar over every love I’ve ever known”.

How much of that is true – how much of any of this is true – I don’t know, and it doesn’t matter. Because “Wild World” is about more that. It is almost a beacon in a way, that however awful the “Wild World” gets, then the music you’ve always loved, will always be around.  For the dreamers.