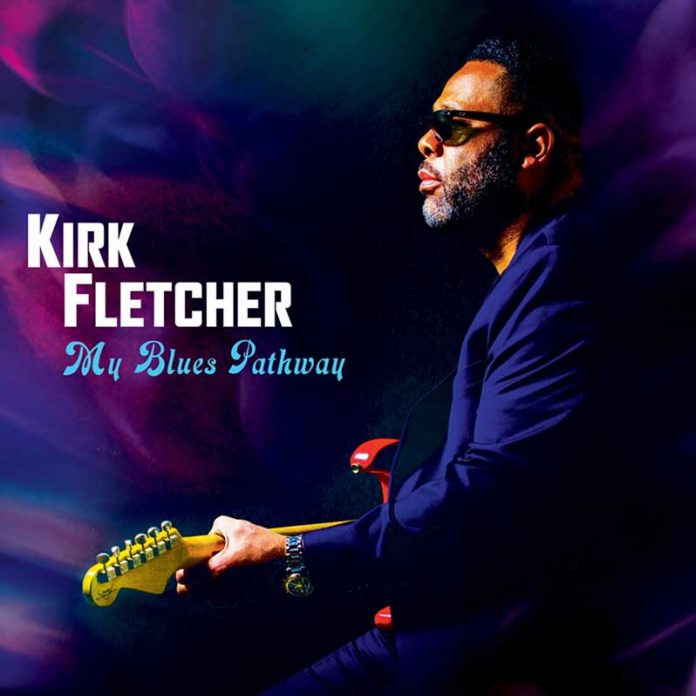 When this album was first announced, I’d assumed that, given the name, it was going to be a collection of covers, detailing the music that set Kirk Fletcher onto his path.

It would have been just fine too, given that blues – perhaps along with prog and folk – seems to be one of those genres that people don’t just dabble with. There’s no hokey-cokey it seems to me, with most. They are all in.

The thing about assumptions, however, is they make an ass of you and me (as the old saying goes) so rather than just covers, this is a collection showing his journey as a lifer, yes, but through his own prism rather than just that of his heroes.

“……Pathway” is his sixth album and the guitar work is as exemplary and excellent as you’d expect it to be – indeed, “There Ain’t No Cure For The Downhearted” has a wonderful solo. But it also has this line: “A great man once said, he had a dream. Do you still dream or are you led by a screen?” In posing that question, he’s bringing this path straight to 2020’s door.

There’s a real soul thing throughout this collection, but never is that more clear than “No Place To Go”, written with Robert Cray’s longtime bass guitarist, Richard Cousins. Personal taste dictates that this type of smoothness isn’t always my favourite, but you can’t deny the class.

“Love Is More Than A Word” is cut from the same cloth (and is another one written with Cousins), it recalls the likes of Otis Redding to me, and Fletcher does have a voice that is suited to this, the way it meshes with the keyboards of Jeff Babko is impressive.

At the heart of this record, it seems to me, is Fletcher searching for his place in the world, his slot in the blues pantheon, if you will, and “Struggle For Grace” deals with that head on, but he need not worry, he has a gift for it.

“Fight Rather Than Switch” proves that, and its raw, pure blues is a real highlight, and as it points out, pretty indignantly, “Jimmy Reed never changed his style” and this belongs right there. As does the deliberately classic feel of “Heart So Heavy”, which is the one you would play to someone who wanted to know what the very essence of “The Blues” was.

The covers, are equally impressive. “Fatting Frogs For Snakes” is a modern take on Sonny Boy Williamson, “Place In This World Somewhere” adds a touch of funkiness, the instrumental “D Is For Denny” is how I imagine those little bars in New Orleans to be as you walk in the door (I’ve never been, so don’t disavow me of it).

And the last cover might actually be the best thing here. “Life Gave Me A Dirty Deal” has an incredible Charlie Musselwhite harmonica solo, and its swampy acoustics are a world away from the polished blues elsewhere.

That’s the thing, though, whether you are a purist, a lifer, or like me, like what you like and to hell with genres there’s plenty here. This is Kirk Fletcher’s journey, through his own music and a life of loving this music. It shines through and is a road that you want to walk with him, perhaps making your own discoveries too.