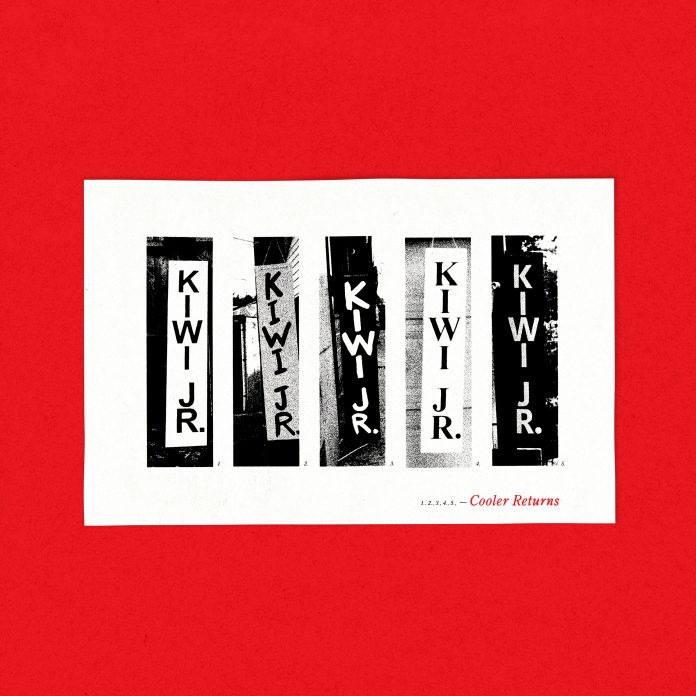 Kiwi Jr comprise of Jeremy Gaudet (vocals, guitar), Brohan Moore (drums), Mike Walker (bass), and Brian Murphy (guitar). They hail from Charlottetown, Prince Edward Island, and relocated to Toronto, Canada. The quartet released their jangly indie-rock debut “Football Money” in 2019 and have a follow up “Cooler Returns” due this month. They have signed to Sub Pop, who achieved fame in the late eighties for signing Seattle bands such as Nirvana, Soundgarden, and Mudhoney, central players in the grunge movement.

The album opens with `Tyler` which is remarkably busy musically with jangly guitars, stop start drums and a fair amount of piano, an almost off kilter Byrds. Frustration at political apathy follows with `Undecided Voters` a quite anthemic composition with the chorus shouted almost as a football chant.

`Maid Marian’s Toast` is apparently written about insurance fraud but as with most of the band`s songs the lyrics are a little surreal but there`s a quite charming enjoyable feel about this number which had me playing it a number of times, which is always a good sign. Manic drumming introduces us to `Highlights of 100` which seemed to have the need to get to the finish line as soon as possible. A track that bounced along with lyrics rapidly spat out.

There was some really enjoyable harmonica and almost twisted guitar riffs on the Byrds flavoured `Only Here For a Haircut` a number that had a stomping feel about it. Title track `Cooler Returns` and `Guilty Party` had a more Jonathan Richman vibe about them, both very whimsical compositions. `Omaha` took me back to my early twenties when I first heard the early REM classics like `Radio Free Europe` blasted through my radio during late night John Peel shows.

A wonderfully distorted guitar leads us into and pops up throughout the pulsating `Domino` which seems to relate to a partner who is loyal and faithful regardless of circumstances. It`s a delightfully enthralling number that benefits from some excellent harmonies. There`s handclaps aplenty throughout `Nashville Wedding` an oddly amusing yarn of attending a matrimonial event but shared in a melodic and quite spellbinding way.

`Dodger` grows in sound as if it`s coming towards you. I have to admit I was a little baffled by the lyrics but adored the keys and what I took to be an accordion but maybe that was me wanting it to be there. A quite wistful offering. Again, the lyrics to `Norma Jean`s Jacket` passed me by and I wasn`t sure if it had to do with Marilyn Monroe or indeed the American metalcore band from Douglasville, Georgia. I would presume the former but nevertheless it was another endearing piece that had me in mind of the Irish ocean-soaked, harmony-heavy band The Thrills.

`Waiting In line` closes out the album and has jangly guitars, steady drumming, piano tinges, and an organ sound that has that Wurlitzer feel. A sort of everyday romantic tale and an uplifting submission to end on.

I really enjoyed “Cooler Returns” and my introduction to Kiwi Jr. The band blend some quirky, surreal, and unusual lyrics with a magnificently mesmerising and compelling musical backdrop. Who else could weave references to play stations, Jack The Ripper and Richard The Third into songs and only raise a smile not a frown?

If you’re a fan of Johnathan Richman, Weezer, The Byrds, The Lemonheads and Pavement, then these are the guys for you.