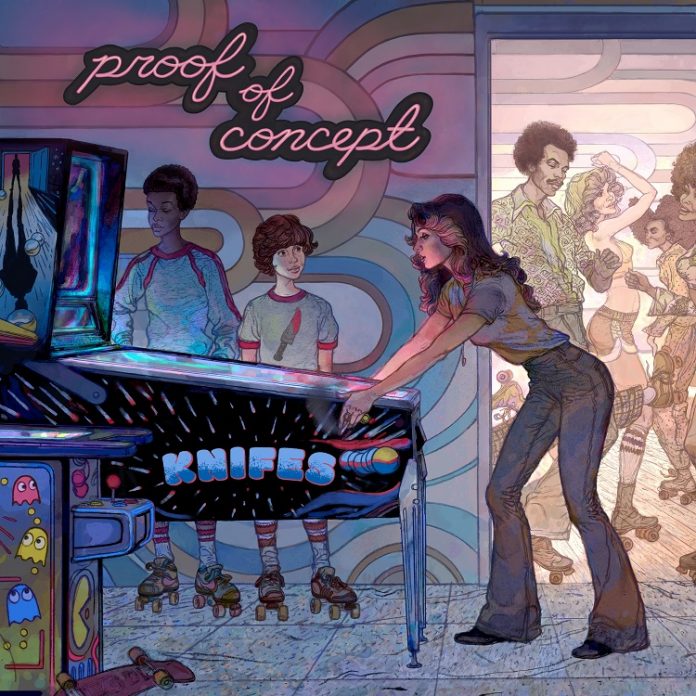 What do you get if you cross Guns ‘N Roses, Slipknot, Deftones, Black Eyed Peas, Pharrell Williams, Linkin Park and Fall Out Boy?

It sounds like the start of the shittest joke you’ve ever heard, but the answer is: Knifes.

You know when you go to a gig and there’s loads of roadies and techy types knocking about? Well, generally speaking they are really talented musicians. And basically, “Proof Of Concept” is proof of the concept, as it were.

To backtrack, as I feel like I should. Ben Young formed the band because he quite liked the feeling of playing to 50,000 in Brazil. Ben, you see, is Linkin Park’s guitar tech and he stood in when a Linkin man got sick a few years ago.

Long – and pretty cool – story short, fast forward to these songs, where he is joined by Warren Johnson (another former LP man) on drums and Brian Diaz (a Fall Out Boy tech) on bass.

Now, here’s where it gets even better, because cute stories make for good bedtime reading, great records get reviewed on this site, and make no mistake about it, this is superb.

It does not, in any way shape or form sound like any of the bands above (although it made me happy, so I guess I can work a Pharrell Williams joke in, right?) it does, though, have plenty to get anyone who ever liked Prong, Helmet or Life Of Agony very, very excited indeed.

Right from opener “Comedown” this is 90s alt metal. Massive great heavy slabs of riff, but with crunchy tunes and choruses that are deceptively catchy.

The quite brilliant “Disambiguation” even adds a touch of punk n roll, and this basically sounds exactly like what it is: A bunch of mates having the time of their lives.

As you’d expect from a band called Knifes, They are extremely good at cutting through the bullshit. “Standard Issue Frustration” is the type of solid gold moshpit inducer that made Dinosaur Pile-up stars. Sloganeering, Any lyric here, would look good on a t-shirt, and the groove on “Defeated And Humiliated”, which is so good that Tommy Victor is going to be salivating, doesn’t so much announce itself as smash the walls down.

“Wise Up” changes tack, adding some acoustic, almost 90s indie to the mix, but it gets all sneering on your ass, with just a hint of Placebo about it. Why? Well, how about because it can. That’s the point here, throughout. “Why?” is always answered with, “why not?”

Whether there’s more music from Knifes might depend on whether tours ever happen again, I guess. However, even if “Proof Of Concept” is a one off, it stands alone as an absolute cracker.