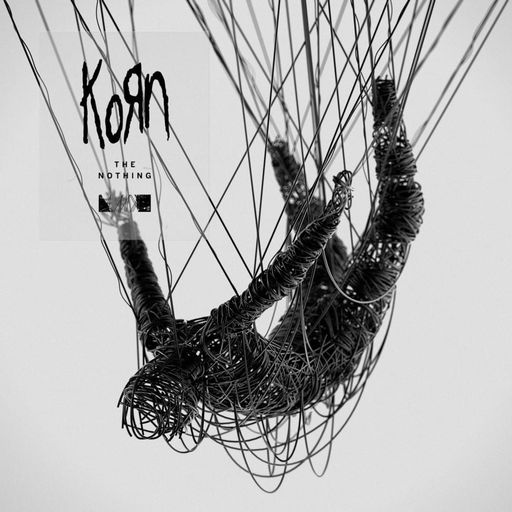 There is nothing that conveys desolation better than the wail of the things. Nothing.

“The Nothing” starts with that sound – and yes, I am aware Korn have often used it in their music – but it has seldom sounded more poignant than it does here. The raw emotion that sees Jonathan Davis cry at the end of “The End Begins” (probably genuine, who knows?) is proof that even for Korn, album number 13 is extremely uneasy listening indeed.

“Cold” ushers in what you might term the “Classic” Korn sound. Staccato rhythms, brutality, a delivery that is completely unlike anyone else’s and a sound that belongs to no one.

“Life is degrading” is the very first line on “You’ll Never Find Me” and just think on this. Even with its horror film type xylophone’s, and the unhinged “I am not doing fine refrain” at the end this is one of the most accessible.

“The Darkness Is Revealing” as a metaphor for the whole work. “Here behind the curtain,” sings Davies. And, really, if you strip back the layers here then, who knows what you find. You probably don’t want to delve too deeply in truth.

Because strip away any of this and there is something absolutely unsettling to be found. “The Seduction Of Indulgence” – a little piece in the middle – is genuinely horrible, “Finally Free” is gentler, ostensibly, but even the ballads here are slaying ghosts, and for all that the synth driven “Can You Hear Me” is the sort of effortless arena rock that Korn have always managed to pull out of these depths, there is a sense of loss running through the whole thing.

The odd thing about Korn, though, is that if you want to just enjoy a seriously innovative band in the moshpit, then you can. The groove of “The Ringmaster” is made for those moments when you just want to bounce and even the cold, clinical industrial sounds of “The Gravity Of Discomfort” have something of a charm.

The superb “H@rd3r” in one line sort of captures the essence here. Yes, it crushes – like a steamroller actually – “they tear my joy out” opines (and opines is a good word for it) Davis, and you kind of think: when you have no joy left is the sound.

One thing that often gets overlooked about Korn is that since 1994 (and honestly, how the hell that has happened, who knows?) Korn have been doing this. The fact that they remain entirely pioneering, because for all the other bands that have followed in their wake (notably King 810) no one has got close to this level of nihilism and matter of fact brutality, but also they take chances. Listen to the odd sounds of “This Loss”, which in places sounds like a musical, or the last one “Surrender to Failure” – which has a kind of “credits roll” feel and tell me this isn’t genuinely original.

“The Nothing” is the sound of everything being poured into a record. Warts and all. And its there for when that childlike innocence of my baby niece banging two cups together like it’s the best thing in the world (which at seven months old it probably is) has long since disappeared. Make no mistake, this is scary as hell.