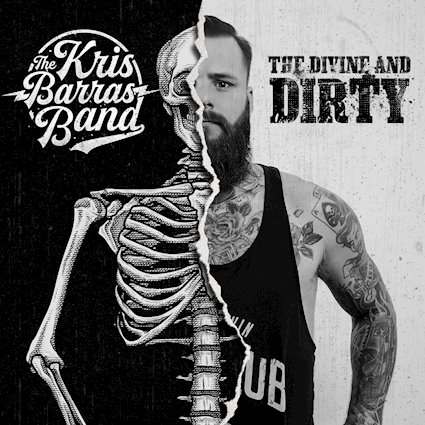 Major label debut that makes good on the promise

18 months or so ago your humble MV scribe reviewed an album called “Lucky 13” by Devonian blues man, Kris Barras (in itself a bit of a story – read the piece). The penultimate line I wrote, was this: “it is tempting to think that The Kris Barras Band are on their way to the bigger leagues.”

Well, it turns out, even in this modern age, there is room for talent to get noticed. And KBB now reside with Mascot Group – home to Bonamassa, Walter Trout and Kenny Wayne Shepherd, amongst others.

All of which means that “Divine And Dirty is suddenly a big deal not just to those who enjoy the work of Barras, but a big deal in general.

Not that he’s fazed. Perhaps it is his background as a major MMA fighter, used to being in front of crowds of thousands, but “…Dirty” is the sound of a man who knows what he is doing, and is more than comfortable doing it.

This has always been his hallmark. On that aforementioned review, the last line said: “[A] fine collection [which] is shot through with a real class, no little skill, but more pertinently some great songs.”

In truth, we could have used the same last sentence here too, given that it sums up these 11 songs just as neatly.

Because, confident and classy is the order of the day. Right from the opening notes of “Kick Me Down” with its drums and big rock sound it is designed for the big stage (literally and figuratively) while the organs and soulful backing vocals reveal another string to this particular bow. It is far from the last one that has some different layers, either.

“Hail Mary” has a huge hook and a chorus that will gate-crash your daydreams in the way the best always manage, and for all the primal intent of “I Don’t Owe Nobody Nothing” – it has echoes of MV faves The Picturebooks so base are its intentions – there is the summery soul of “Propane”, but then such is the songwriting ability here that it is only when listening properly you hear Barras sing “you can light up a cigarette and stub it out all over my hope” in a real jarring juxtaposition.

That’s not to say “…Dirty” doesn’t have a nose for sniffing out trouble, though. The classic honky tonk stomp of “Right Place At The Wrong Time” revels in getting down and dirty, and anyone who isn’t ready to hail Kris Barras as something special will have their mind changed by the southern rock masterclass that is “Lovers And Losers” with its gifted lead work.

Not that he’s finished there. “She’s More Than Enough” is blues-infused hard rock that few do better, “Stitch Me Up” might just be the product of a Quireboys and Black Crowes obsession, then again, that might just be me. Either way it’s magnificent.

And if you’re wanting a change of pace, then “Hold On For Tomorrow” provides one. Fragile, cracked and the sound of nights on the road, it builds wonderfully, before “Blood On Your Hands” is AOR that Journey would be proud of.

You probably never expected that. But the timeless blues of “Watching Over Me”, with its lead straight from the Walter Trout school of making the guitar gently weep, is a timely reminder that there is pretty much nothing the Kris Barras Band can’t pull off with aplomb.

The cover reveals two sides to the artist. The title of the album a couple of others. The music on “Divine And Dirty” lets you see so much more. Whatever it does, though, the record is magnificent.